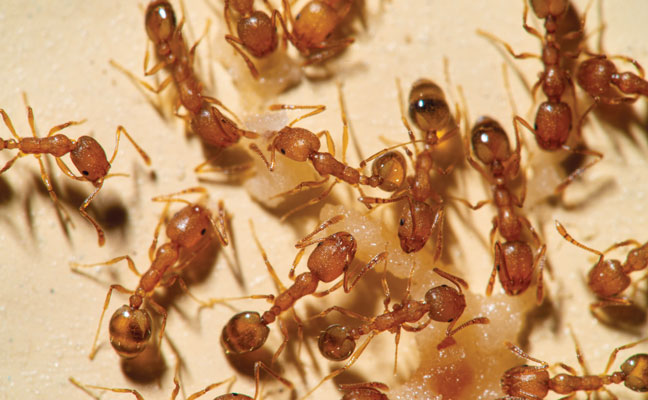 When pest management professionals (PMPs) think of stubborn pests, one of the first names that comes to mind is the pharaoh ant (Monomorium pharaonis).

However, the most recognizable pharaoh in history wasn’t named. Although popular depictions* of the Exodus story identify Ramesses II as the antagonist, the Hebrew scriptures omit the pharaoh’s name.

In the story of Exodus, the pharaoh’s “heart was hardened” at least five times, resulting in
10 plagues brought upon Egypt. This stubborn behavior has theological implications that won’t be explored here, but suffice to say that it took some extraordinary effort, including multiple pest plagues, before the Israelites could escape from slavery in Egypt. Let’s explore two pest control lessons that can be learned from this story:

1. Unlike the unnamed pharaoh of the Bible, identify your pest. Because of the pharaoh ant’s predilection for budding when exposed to repellent insecticides, proper identification is a requirement. By determining exactly which pest ant is infesting the structure, a comprehensive management program can be developed based on its biology and behavior.

2. Pharaoh ant infestations can be stubborn, often requiring multiple callbacks to get satisfactory control. In most parts of the country, pharaoh ant nests will be found indoors due to the species’ temperature requirements. Based on this information, technicians sometimes limit their treatment to the indoor areas of the account. But despite their indoor nesting preference, pharaoh ants will eagerly forage outside to find food during warm weather. Because infestations often are comprised of multiple small colonies, apply numerous small bait placements — according to label instructions — both inside and out.

It may have taken 10 plagues to get through to the pharaoh of Exodus, but with some extra knowledge, it shouldn’t take 10 callbacks to rid your client’s building of stubborn pharaoh ants.

*See The Ten Commandments (Paramount Pictures, 1956), directed by Cecil B. DeMille and starring Charlton Heston, or The Prince of Egypt (DreamWorks Pictures, 1998), an animated adaptation of the movie.

Align your team to meet your company objectives