The team hosted a ribbon-cutting ceremony on Aug. 3 to celebrate the official branch opening.

The Tallahassee branch is the fifth service branch for Native Pest Management with other office located in West Palm Beach, Port St. Lucie, Margate and Fort Lauderdale, Fla., with service areas from Vero Beach down to Miami, Fla.

“This is huge for us because we’ve been a ‘South Florida’ company since our inception. By starting service in North Florida, we’ve taken a big step forward towards becoming known as the go-to solution for pet-friendly pest control throughout the state. That’s why we are so excited to provide pest control in Tallahassee. We get to help more people become pest free,” Lewis said.

In 2022, Native Pest Management has opened offices in Fort Lauderdale, Port St. Lucie and now Tallahassee. With plans to open a Miami, Fla., branch later this year, the company hopes to continue to expand its service areas throughout the state of Florida. 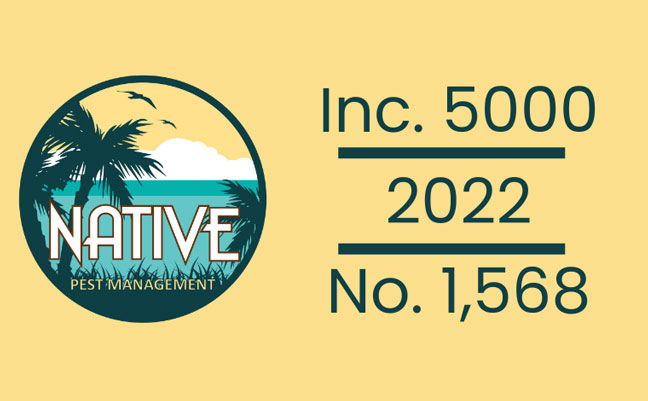 Native Pest Management was ranked No. 1,568 on the annual Inc. 5000 list, a list ranking the fastest-growing private companies in America.

This is Native Pest Management’s second year in a row making the list with a three-year revenue growth of 278 percent. The company was also ranked No. 127 in Florida, No. 117 in consumer products and services and No. 58 in the Miami, Fla., area.

“Our goal has always been to exceed customer expectations. Making it on the Inc. 5000 List for two years in a row is the result of our team’s focus on achieving that goal,” Lewis said. “We grew from 24 to 64 employees in the last three years and now we’re one of the top-rated pest control companies in Florida.”

Locally, Native Pest Management was a Platinum winner for Florida Community Association Journal’s 2022 Readers’ Choice Award and was No. 18 on the University of Florida’s 2022 Gator100 list of the fastest growing University of Florida alumni-owned businesses in the world.

As an Inc. 5000 Fastest Growing Company in the U.S. for two years in a row, Native Pest Management has continued to rapidly expand through organic growth without the aid of door-to-door pest control sales.