The many accomplishments of Richard Deering, Steve Levy, Jay Nixon and Ted Oser were in the spotlight at the Revere Ballroom at the Sheraton Hotel, where pest management professionals (PMPs), guests, and pest control suppliers and marketing partners honored these four pest control industry leaders and innovators. Each inductee received a plaque that will be added to the display featuring past inductees that is on the walls of Purdue University’s Smith Hall. 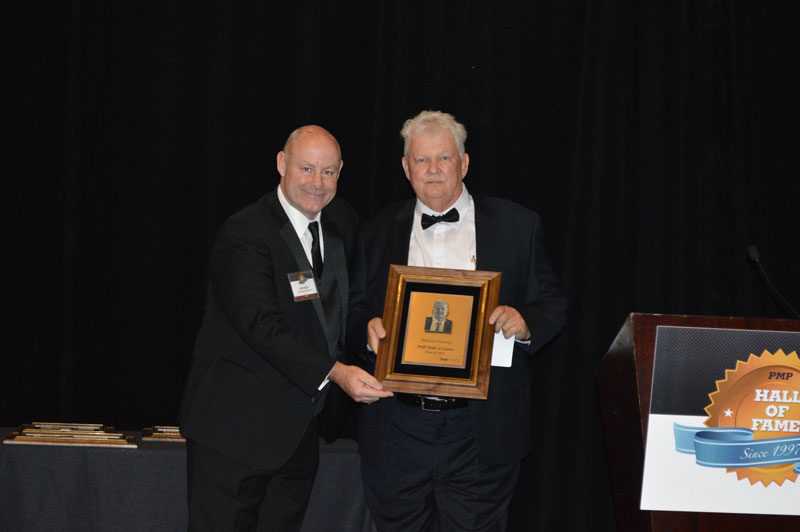 Richard “Dick” Deering is a pioneer of service industry business software. As a pest management professional and lawn care operator, he built ServicePro from the ground up nearly 40 years ago in an effort to run his business more efficiently.

“There were no good software for service industries in the early 1970s,” Deering said. So, he developed the program that eventually became ServSuite. Deering retired in December 2021. In January 2022, ServiceTitan acquired ServicePro, which joined forces with FieldRoutes under one umbrella. Daughter Kim O’Connor and son Andy Deering joined the company in the late 1990s; they currently serve as head of operations and general manager, respectively. Deering’s common sense, his desire to “keep it simple, stupid (KISS)” and his experience in the service industry contributed to the company’s success. He also credits his employees. “There were people who worked at software companies who came to work for us,” he said. “They were good on a keyboard, but they didn’t know a termite from an ant.”

At the podium while accepting his plaque, Deering thanked his family: his wife, three children, 11 grandchildren and a great-grandchild. He shared what he went through over the course of his career. “We went through a huge transition of how people run their businesses in the past 40 years.” Deering explained how the need for a better way to handle accounts receivables helped launch the company, and the stages he went through to develop the software available today. In closing, Deering acknowledged ServSuite longtime employee Randy Hames, who passed away from cancer in 2021. “Between Randy Hames and myself, we probably visited over 30 years, half of the [pest control] companies out there. A wonderful, wonderful individual.” 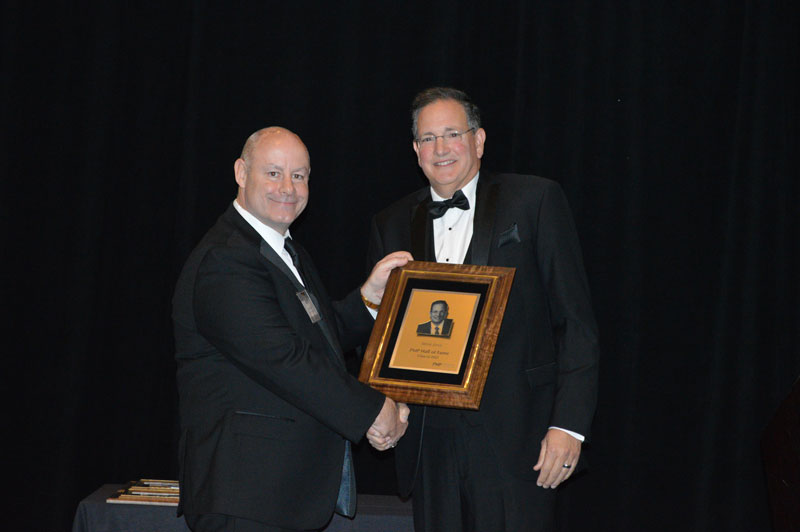 Steve Levy is Bell Labs’ CEO and has served the industry in many ways beyond being a leader for rodent control product manufacturing. He has made a difference in the pest control industry by staying active in leadership roles for organizations such as the United Producers, Formulators and Distributors Association (UPFDA), and has advocated with other industry associations on behalf of risk mitigation with rodenticides. In addition, he has, through a variety of Bell programs, helped protect areas worldwide from invasive rodent species and been an environment steward through product technologies and sustainability initiatives. With most of its products produced in the United States, all of its black bait stations are made with 100 percent recycled materials. All wooden shipping pallets are recycled, and its corrugated master boxes feature 40 percent recycled content. Even the company’s newest product line, iQ Products Powered by Bell Sensing Technologies, was designed with the environment and the technician in mind: Fewer labor and fuel costs pair with more accuracy to lead to more customer (and employee) satisfaction. “I’m proud of the stewardship we have in the industry,” Levy said.

When he accepted his plaque, Levy said, “I want to thank the owners of Bell Laboratories, Linda Hughes and Anne Connor, for their confidence and for allowing the continuous reinvestment in the business. From an industry perspective, I always rooted for our collective success. It was very apparent to me from our early days that this was an industry that cared about its purpose and each other. I was able to meet and work with some of the nicest, decent and most sincere people that I’ve ever met. Consequently, I took it as a personal challenge to do all I could to enhance the professionalism and the image of our industry. That challenge never really ends.” He also thanked his wife of 36 years and his twin daughters. 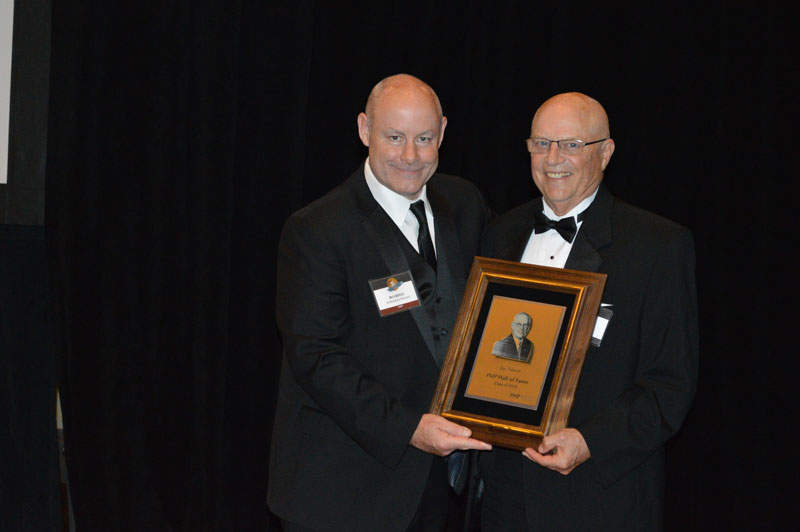 Jay Nixon is considered semi-retired from Fulton, Md.- based American Pest, an Anticimex company, but he is hardly resting on his laurels. With his son, Matt Nixon, running the operations, he is free to travel as a troubleshooter for the company, particularly for U.S. government accounts worldwide. Nixon, who earned a master’s degree in entomology in 1973, points to many mentors for his career, from the university’s Dr. Gene Wood, who steered him to his first industry post with a real estate inspection company, to fellow PMP Hall of Fame Members Dr. John Osmun (Class of 1997) and Bob Rosenberg (Class of 2013). “Dr. Wood started Maryland’s Interstate Pest Management Conference, which still goes on today, and I helped Bob with the first Legislative Day, back when there were only about 20 of us in attendance,” he said, referring to the National Pest Management Association’s (NPMA’s) annual event. He served as the 1993-1994 president of the NPMA, then known as the National Pest Control Association (NPCA). “One accomplishment I can claim there is the start of joint state membership,” he said.

Nixon thanked the titans of the industry who guided him over the course of his career, including PMP Hall of Famers Bob Dold and his wife, Judy (Class of 2002); PMP Hall of Famer Bob Jenkins Sr. (Class of 2005), past NPMA president Judd Pestana, and the University of Maryland’s Dr. Gene Wood. “It’s just been one helping hand after the other. Whatever contributions I’ve made to this industry, it’s a small amount from what I have received from the support and friendship of all of you over the years, and for that I am eternally grateful.” 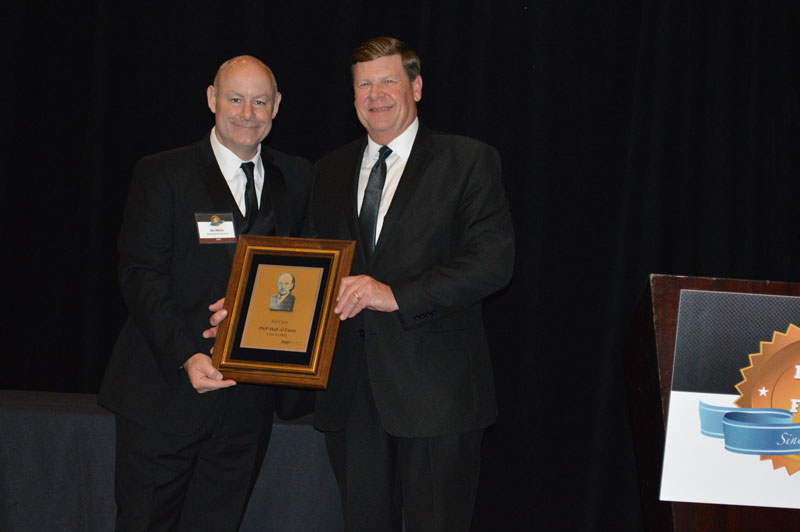 Ted Oser is this year’s posthumous inductee. Oser, who was born in 1904 and died in 1986, and fellow PMP Hall of Famer Bill Buettner (Class of 1998) worked tirelessly to get pest control considered “essential” in the 1940s, at the height of World War II. Only the pest control and the mortuary industries had such status. Through his mother, Bertha, Oser was the nephew of fellow PMP Hall of Famer Otto Orkin (Class of 1999), the powerhouse behind Atlanta, Ga.-based Orkin Pest Control. In addition to being active in the National Pest Control Association (NPCA), the name of the National Pest Management Association (NPMA) at the time, Oser rose in the ranks to become VP of what was then known as Orkin Exterminating. In October 1944, during the annual conference in Chicago, Ill., he was elected president of the NPCA. He holds the distinction of being the first NPCA president to be re-elected; he served in 1944-45 and 1945-46.

Chris Gorecki, VP of operational support, Rollins Inc., accepted Oser’s plaque, noting, “It’s pretty impressive that when you think about some of the same things we are dealing with today, people were thinking about it back then to give us the industry we have today. That’s truly, truly special. I’m proud to accept this award on behalf of Ted, his family, the Orkin and Rollins families also.”