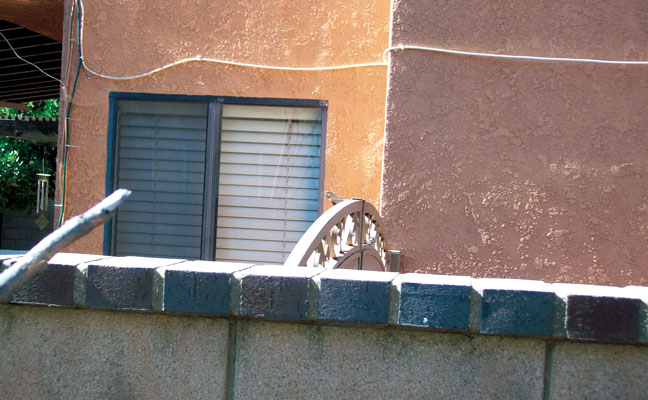 Photo 1: The top of the iron gate connects the block wall to the house. Photo: Dr. Hanif Gulmahamad

If you’ve worked in the professional structural pest management industry for very long, you likely have heard many reports of the “smart rat” that was virtually impossible to dispatch. I do not know whether roof rats (Rattus rattus) can be characterized as “smart,” but what I do know from decades of field experience is that some adult roof rats are very leery animals. It can be said that these rodents did not get to become adults by being unwise.

When undertaking a commensal rodent abatement program, a pest management professional (PMP) is sometimes confronted by that last rat that is difficult to eradicate. What follows is my report of a seldom-used tactic I used to catch an adult roof rat that was demonstrating unusual behavior this summer at my home in Southern California. 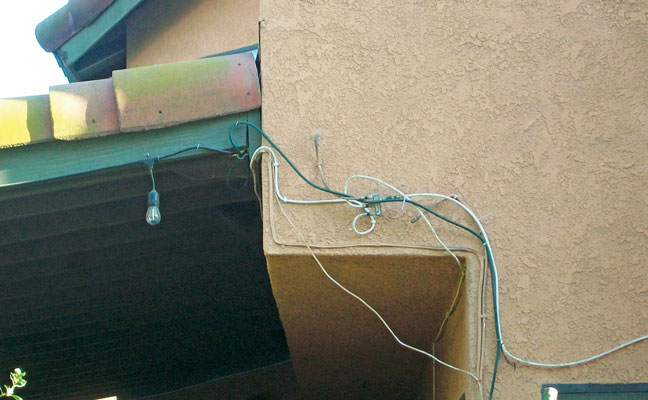 Photo 2: The rat used TV cables to get to the top of the patio. Photo: Dr. Hanif Gulmahamad

The rat was running east and west in broad daylight on top of a concrete block wall that separates my yard from my neighbor’s yard. While sitting at my dining room table and looking out through the sliding patio glass door, I observed this rat on many occasions running and scampering about with great enthusiasm and speed. It often traveled east on the wall until it encountered fruit tree limbs that were touching or overhanging the wall; it would use these avenues to disappear into the vegetation.

When traveling west, it would scamper down the wall, stop at my storage shed, and disappear under the structure. On several occasions, I observed this rat running across the top of an iron gate that is attached to both the wall and the house (Photo 1). This was its convenient bridge to access both structures.

With great acrobatic dexterity, it would use the white TV cables attached to the house to clamber up to the patio roof and disappear while traveling south (Photo 2). Notice that an area of the barrel end tile abutting the wall of the house was brushed clean by the hairs on the foot pads on the rat after repeatedly scurrying up there.

I originally thought it would be easy to dispatch this errant rat by setting several snap traps baited with slices of fresh apples, raw walnut meats, and prunes. I soon realized the trap baits — the apple slices in particular — had to be replaced daily because when ambient temperatures exceeded 100 degrees Fahrenheit, they would dry out, shrivel up, and lose palatability rather quickly.

In addition, when running on the wall in full daylight where it was clearly exposed to predators, this rat was sprinting at full speed — to the extent that it knocked the traps out of position without setting them off. It is possible that expanded trigger traps might have been more efficacious in this situation, but I did not have any readily available.

NO TIME FOR BAITS 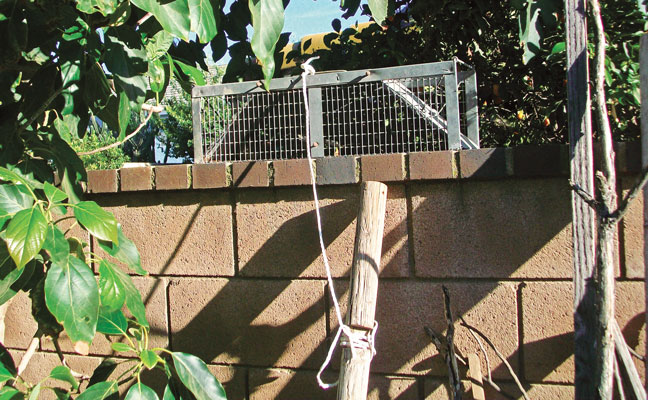 Photo 3: The live trap was placed on top of the block wall. Photo: Dr. Hanif Gulmahamad

It has been reported that rats can run up to 7 miles per hour, and can reach a top speed of 8 miles per hour over short distances. It also has been suggested that if a rat was the size of a human, it would be able to run as fast as an Olympic sprinter.

My target roof rat was apparently aware that it was dangerously exposed in full daylight on top of the block wall, and thus had neither time nor interest in stopping to sample baits on snap traps, regardless of how appetizing the baits might be.

I observed at least two aerial predators in the vicinity, namely a sharp-shinned hawk (Accipiter striatus) and a Cooper’s hawk (A. cooperii). These avian assassins are opportunistic hunters: In addition to preying on pigeons and other birds, they will take small rodents when available. In my quest to catch this rat, however, they were of no help. 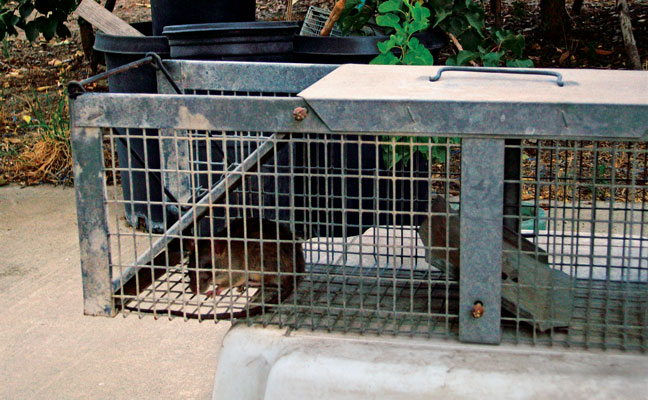 After failing to catch this troublesome rat with snap traps, I decided to set a live-catch trap on top of the wall. I have several live-catch traps left over from animal ecology studies conducted years ago on ground squirrels.

One trap I used measured 24 x7 x 7 inches — the exact dimension to completely cover the top of the block wall (Photo 3). Thus, this skittish rat could not scamper along on top of the wall without running through the trap. I did not bait the trap, since I was setting it up to be a “blunder trap” (for said rat to “blunder” into).

It did not take long to capture this rat (Photo 4). At first, I wondered whether this was the appropriate-sized trap to catch a roof rat because the mesh on it was about a half-inch in size. From the start, most PMPs are instructed when training for commensal rodent control that a rat can pass through a hole a half-inch in diameter, the size of a U.S. quarter. If a rat can get its head through an opening, it can squeeze the rest of its body through.

“My” roof rat, as shown in Photo 4, was a full-grown female. It is clear she could not possibly get through the mesh of this trap. Had she been a young, juvenile roof rat, however, she might have been able to do so.

Attempting to live-trap a commensal roof rat is not a standard control tactic in the structural pest management business; however, it can be successfully employed in certain situations to catch an otherwise trap-shy rodent.

This wasn’t my first time live-trapping a “smart” roof rat. For example, I recall one that was creating mayhem in a pie manufacturing facility. This animal developed a taste for cherry pie filling in particular. By liberally smearing the entrances and insides of a live two-door trap with the filling, I was quickly able to catch this marauding beast when other control strategies failed.