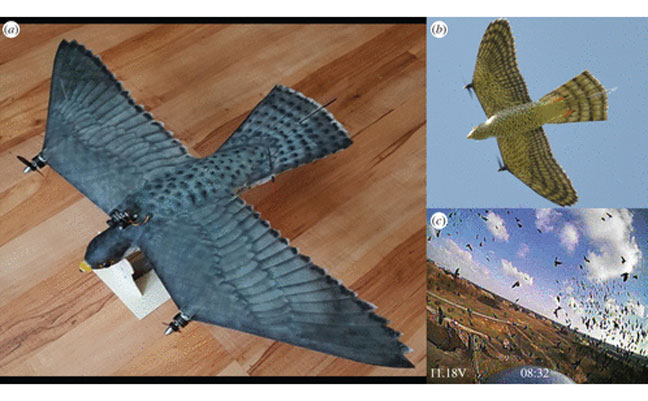 Researchers at the University of Groningen in The Netherlands have created a robotic falcon that they can use to scare flocks of birds away for hours.

A wildlife strike is when an animal, typically a bird, hits an airplane as it’s taking off, flying or landing. About 16,000 wildlife strikes occur each year in the U.S., which poses an abnormally large risk to pilots and passengers. While most prevention methods involve delaying takeoff or landing until bird activity dies down, it can cause disruptions to already strained flight schedules and systems, according to Yahoo! news.

In a study published Oct. 26 in the Journal of Royal Society Interface, the team engineered the drone, dubbed RobotFalcon, to look and fly like a peregrine falcon — a vicious predator to other birds.

The device performed better than a conventional drone, distress calls, and pyrotechnic deterrence, or shooting fireworks at the birds. After the field testing concluded, the researchers found that the RobotFalcon also resulted in less habituation, which meant that the wildlife it was scaring away never got desensitized to it.

“In our three months of fieldwork, there was no evidence of habituation of birds to the RobotFalcon,” the study’s authors wrote. “We speculate that the RobotFalcon continued to be effective because of its resemblance in behavior and appearance to a real falcon.”

The faux-falcon is made of fiberglass and has been shaped and painted to look like a real falcon. It has a drone propeller attached to each wing that allows it to travel at nearly 50 feet per second. The device also has a camera attached to it to allow its pilot to see where it’s going.

The team conducted field tests for RobotFalcon for 34 days in Workum, The Netherlands. They also ran tests using a conventional drone, distress calls, and pyrotechnics. By the end of testing, they found that the device more often cleared the testing area of birds and kept them away for longer periods of time.

While it’s a promising piece of technology for dealing with a persistent headache for pilots and travelers all over the world, the study’s authors caution that there are still a few hurdles.

For one, operating the RobotFalcon requires training. The flights are also limited by a short 15-minute battery life. Weather plays a huge factor, too, as the device can’t take flight if it’s too rainy or windy.

However, it’s a good start to what might eventually become the future of bird strike prevention. Some pest control firms are already using drones, and there are some models on the market that can be used for inspection and even application.

What do you think of this new way to control birds? Let us know in the comments or at pmpeditor@northcoastmedia.net.