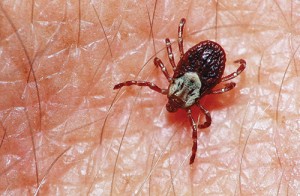 A long, cold winter doesn’t have the chilling effect on tick populations you might expect. In fact, experts agree that a heavy-snow winter serves better to insulate the Lyme disease vectors until they can emerge in full force during the spring thaw.

Dr. Jim Dill, a pest management specialist at the University of Maine Cooperative Extension, recently held a press conference at the State House in Augusta to explain why the exceptionally bombastic New England winter will likely have little to no effect on Maine’s tick populations.

Maine’s Lyme disease cases are down so far this year compared to last year at this time, but the deer ticks carrying the disease didn’t die off under those layers of snow. Experts like Dill have explained they were actually biding their time in dormancy, waiting for the spring.

The Maine Center for Disease Control and Prevention recently revealed data showing that through May 26, only 89 cases of Lyme disease were reported in the state, compared to last year’s 166 cases through May 2014.

Their later-than-usual emergence is not expected to curb tick activity, either. Because snow still covered the ground as late as April in parts of Maine, ticks laid in waiting longer than usual. But experts agree that lower Lyme disease numbers aren’t very helpful indicators of what’s to come.

The fact that they are emerging later could mean a higher peak of tick activity this summer because the window of time in which they are active is shorter. In other words, dormant ticks could be emerging all at once.

Most states with significant tick activity, such as Maine, have seen a notable increase in Lyme disease cases over recent years — another reason to be skeptical of Maine’s decrease in cases through April being a sign of a diminishing problem. It’s more likely that the problem has just been preempted by the long winter.

“With cases numbering in the thousands, the ticks that carry Lyme disease are tiny and easy to overlook,” Sheperdigian says.

Lyme disease cases in Maine alone have jumped from fewer than 300 cases a year about a decade ago to more than 1,000 every year since 2011, according to a report on CentralMaine.com. One reason cited is that the deer tick has expanded its range and become more common in states like Maine over the past 20 years.

“Ticks are the most important arthropod threat to human health,” agrees Dr. Jim Fredericks, vice president of technical and regulatory affairs for the National Pest Management Association (NPMA), also a PMP contributor. “In addition to being vectors of the most commonly transmitted arthropod-borne disease — Lyme disease — there are other less commonly encountered but equally serious maladies such as Rocky Mountain Spotted Fever, babesiosis, erlichiosis and others that can be transmitted by ticks.”