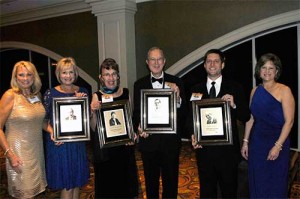 Celebrating the PMP Hall of Fame are inductees and family members of the two posthumous honorees.

Pest Management Professional (PMP) inducted the 2015 class of its Hall of Famers at a black tie reception Oct. 19 in Nashville, Tenn.

John Cook Sr. built Cook’s Pest Control into one of the largest pest control companies in the country. The Decatur, Alabama-based business was known throughout the region for its Cookie the Cop advertising campaign and catchy jingle. The company has branched out into 25 cities in Alabama, Tennessee, Mississippi and Georgia. Cook also launched the Cook Museum of Natural Science in the 1960s with a collection of insects used to train employees of the company. Since that time, more than 750,000 people have visited the popular local attraction, a new state-of-the-art facility is currently under construction. Cook died in February 2009 of pancreatic cancer. Accepting his award was grandson Brian Cook, who now works in the pest industry.

“It really would have meant a lot to him,” Brian Cook said. “It really means a lot to my family, myself, and all of our employees. I think about him every day. He was truly the greatest personal example of living out his faith…to love God and to love people. He lived that out every day.

“He surrounded himself with good people and he empowered them and trusted them to take the business and run with it…He showed us the way and we continue on in that same vein.”

“We appreciate so much the honor that you’ve given our dad,” Shaw said. “We loved him; he was a great father. Actually, they were great parents. We respected them because they made everything they did themselves. We hope the future follows these people that really made America.”

Dr. Laurel Hansen’s entomology career spans 30 years. As a researcher of all things ants, she is a biology instructor at the Spokane Falls Community College in Spokane, Wash. Her teaching career spans 47 years, however. Over the years, Dr. Hansen has taken advantage of research opportunities that have allowed her to study and collect ants from all over the world. Son Darren and daughter Devorah were on hand to watch their mother accept her award.

“I am so very overwhelmed and so amazed to be joining this elite group of Hall of Famers,” Dr. Hansen said. “I thank my daughter and my son for being here with me tonight; they’re my pride and my joy. I also want to thank the members from the Washington State Pest Management Association where I actually got started with my research…and they’ve been with me ever since.”

“I have the best job in the world. I love to teach…and with only a 170-day contract, I am able to do a lot of research…I love it all and so I do have the best of both worlds.”

Dr. Phil Koehler, professor at the University of Florida/Institute of Food and Agricultural Sciences extension in Gainesville, Fla., played a key role in creating a professional industry in Florida by offering training programs for pest management professionals and conducting research. He has a passion for research and has studied German cockroaches, ants, fleas and termites. He has served as a mentor to many in the pest management industry; several of his students have gone on to careers in the industry and they were there to see him accept his award.

“It is a huge honor to be inducted into the PMP Hall of Fame,” Dr. Koehler said. “I must admit that it’s something I never dreamed of because this is such a valuable industry for the country and also, it’s an industry that provides a lot of opportunity for our students.”

“I wouldn’t be up here if it wasn’t for a whole bunch of students who are still in the industry. How about you guys standing up and be recognized. I have favorite stories for everyone.”

Each of these candidates was nominated by members of the industry and voted in by the Hall of Fame committee, whose membership rotates each year. If you’d like to be part of the nomination process for the Hall of Fame Class of 2016, click here.

How to curtail cockroach callbacks

5 ways to show you care during the holidays