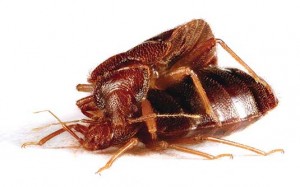 The birds and the bees have nothing on bed bugs and their mating habits.

Should I stay or should I go?

⦁ Female bed bugs have shorter lives because of frequent mating.
⦁ Bed bug dispersion may have more to do with population density than with mating frequency.

As you may know, bed bugs practice what we refer to as traumatic insemination, in which the male pierces the female’s abdomen to inject sperm rather than gently “slipping the mail through the slot,” so to speak.

There is a “special place” for receiving sperm that reduces the injury to the female, but studies show that there is a cost to her survivability for multiple matings. This has given rise to the common explanation that mated females disperse to protect themselves from further mating. While this seems a plausible explanation from a human point of view, there may be more to the story.

Conflicting data
In their natural environment, we normally find bed bugs in aggregations that gradually become larger and more numerous. As the infestation becomes heavier, we are more likely to see single bugs off by themselves. Some research suggests that there are more lone females than males or immatures; other studies have found dispersing bed bugs from increasingly crowded conditions to be unpredictable for sex or life stage. This would suggest that all bed bugs disperse — not just mated females.

Bottom line, then: Do females disperse to avoid mating? Or are they just dispersing?

There is at least one study that indicates that freshly hatched bed bugs survive in much higher numbers when an adult is present. As pest management professionals (PMPs) encounter one infested apartment after another, we often find one adult female surrounded by nymphs of varying stages, as well as eggs. This fits with the genetic research from North Carolina that found in almost every case, the bugs in an infested apartment were all descendants from one or two individuals. In other words, one mated female or mated pair started the whole business.

On the other hand, repellency studies often find that bed bugs favor harborage that has been previously inhabited by other bed bugs. They will even harbor on treated surfaces, if they have been inhabited before. This would indicate that the act of dispersing is drastic behavior for any bed bug, but when the neighborhood gets too crowded, it’s time to move out.

Several studies about heavy bed bug infestations conclude that increased environmental complexity increases bed bug density. That means the more clutter there is, the more bed bugs will live there before dispersing to more distant harborage.

It seems popular for PMPs to explain bed bug dispersal as a function of females fleeing the unwanted advances of randy male bed bugs, but is this correct? Because there is research that seems to support different sides of the argument, it is left up to us to simply make popcorn and wait for the rest of the research to come in.