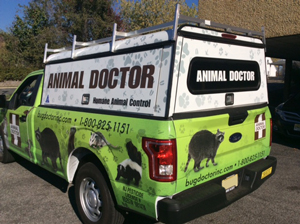 Bug Doctor Inc., Paramus, N.J., has rolled out its first customized vehicle wrapped truck for Animal Doctor, one of its seven divisions. Animal Doctor was founded in 2004 by Stuart Aust, President and CEO of Bug Doctor and a PMP contributor.

“Our Animal Doctor techs simply used Bug Doctor vehicles for a long period of time, but then last year we were able to add a truck featuring the Animal Doctor name,” notes Aust. “This latest edition, though, a brand-new 2015 Ford F-150, is an extreme wrap.”

Aust says the new truck is the first in a pilot program for the extreme wrap vehicles for his company. So far, the eye-caching design has increased awareness in a big way.

“Right now, we are on an uptick of close to 20 percent more Animal Doctor calls than usual,” he reports.