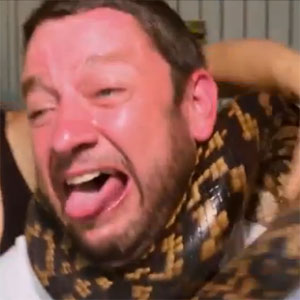 Pest management professional Craig Freeman of Stop That Pest in Birmingham, England, was filming the reality TV show “Deadliest Pests Down Under” in Australia when he was nearly strangled by a python.

Seen in the video clip from the TV show, the snake wrapped around Freeman’s neck shortly after he grabbed it by his bare hands to remove it from an indoor location.

“We would take a call and we wouldn’t know what we were going to — they wanted to get our reaction,” Freeman tells Birmingham Mail. “I don’t like snakes or spiders or anything like that; I’m terrified of most things. I work in pest control, but I hate all those types of things.

As part of the TV show, Freeman says he wasn’t given any information about the pest control accounts he was called to.

“We would take a call and we wouldn’t know what we were going to,” Freeman says. “They wanted to get our reaction. We weren’t given any tools — you have to use your wits.”

Nearly half of Pest Management Professional 2016 State of the Industry survey respondents offer wildlife management, and more than one-third report the niche’s profitability is increasing. But the return on investment and extra equipment expenses has to be carefully considered — as well as safety.