Norm Cooper, who spent 63 years in the professional pest management industry, passed away April 5 at age 85 after a year-long fight with a blood disorder known as myelodysplastic syndrome (MDS). 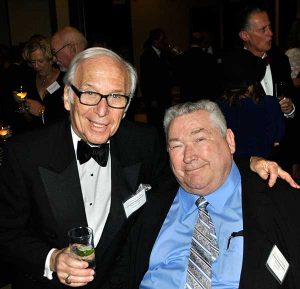 The PMP Hall of Famer (Class of 1999) had many friends in the pest management industry. Following are memories from a few:

A memory of Norm Cooper of which I have carried with me for life, was as a student helper at the Purdue conference close to when I getting ready to graduate in pest control. Norm came up to me to offer congratulations and said “Work hard and don’t forget to give back whenever you have the chance.”

At the time, I’m sure his advice didn’t fully register. But with each passing year of my career, those 12 words of Norm’s always seem to revisit me. Hearing of Norm’s passing, his advice in his voice from back then was the very first thing that came to mind, and I immediately wished I had said thank you to him at some conference, at some meeting for that short lesson of altruism — perhaps the most important message in life.

(Editor’s Note: Len was hesitant to share his favorite story about Norm, but we think it illustrates Norm’s sense of humor and identity quite well)

When I worked with Norman, we had access to all the sporting events in NYC Madison Square Garden. He never used any of the tickets. One day I asked him why he never went to a NY Knicks basketball game. His answer was, “When they put a 5’8″ bald Jewish accountant on the team is the day I will go see them.”

Norm’s desire to help others is well known in the pest management industry. That passion went well beyond that. On more than one occasion, he spearheaded drives to help oppressed persons in other parts of the world. We were proud to call him our friend. The world and our industry lost a compassionate and outstanding human being.

I’ve known Norm since the late 1980s. We first became business associates, then soon after, friends. He loved this industry, but more importantly, he loved its people. He typified the qualities of a great leader. He led by inspiring and motivating.  His knowledge of the industry was unparalleled; his impact significant. He was a “teacher,” a humanitarian, an accomplished artist and a gentle giant. I have lost not only a respected peer, but a dear friend.

We always had a lot of fun on all of our travels together, but one story that stands out in particular happened in 1996, in Israel. Norm asked me, “Have you ever seen Jerusalem in the moonlight?” This was my first time there, so I said no, I hadn’t. Now, Jerusalem had been experiencing rocket attacks, so it was just Norm and me, our wives didn’t want to come. So we left Tel Aviv and headed to Jerusalem in the dark.

We ended up in an area not as immaculate as the rest of the city. “Do you know where you’re going?” I asked.

“Yep, I know where we are, no problem,” Norm said.

We turn down a street and walk past five teenaged boys, who stopped working on a car to stare at us.

“Just look straight ahead and walk briskly, like you would in New York,” Norm hissed over to me. We marched right past the group, and proceeded to turn right, following the road.

It was a dead end. Like something out of a movie, we were face-to-face with a wall. We knew that the teens knew it, too.

I turned to Norm and said, “What do you think we should do now?”

He looked at me and I’ll never forget his reply:

“Bob, there are things you need to know right now. Number one, this is not the smartest thing I’ve done in a long time. And number two, you’re going to follow my lead. We’re going back the way we came, only we’re going to double-time it!”

And that’s exactly what we did, getting back to a more familiar part of town.