It was 1979 in Providence, R.I., when not only the world’s largest bug was born, but one of the world’s best branding ideas was conceived by New England Pest Control Founder Leonard Goldman and his son Stephan.

By 1980, Nibbles Woodaway — a replica of an Eastern subterranean termite (Reticulitermes flavipes) that is 58 ft. long, 9 ft. tall and 4,000 lbs. — was installed on the company’s roof. Because the business is located just beside Interstate 95, it’s visible to millions every year.

In New England, Nibbles is as iconic as Mickey Mouse and known by all who live there. He’s not only well known, but loved by many, too, as evidenced by the social media support given to him after a recent vandalism event. 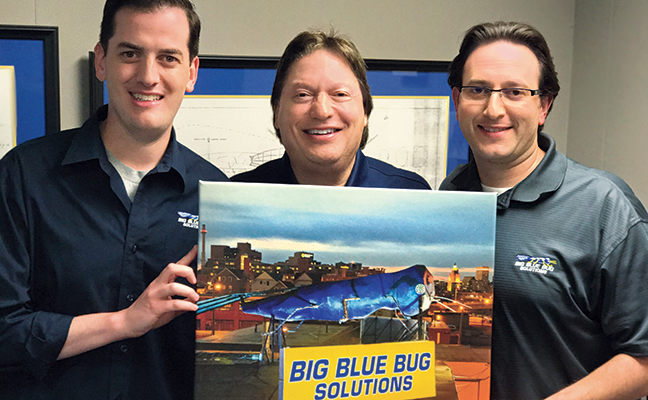 From left, Big Blue Solutions’ Brian, Stephan and Scott Goldman show off the iconic termite that appears to have landed on top of the company’s Providence, R.I., building.
Photo: Ray Johnson

The company has sent more than 50,000 8×10 photos to fans by request. It dresses up Nibbles for various holidays: an Uncle Sam hat for July 4, a witch’s hat and broom for Halloween, and a red blinking nose and antlers for Christmas.

I had the pleasure of visiting with Stephan, now president and CEO, and his sons Scott and Brian recently. I met most of the friendly staff and enjoyed a wonderful seafood lunch with great friends.

Stephan loves to tell the story of how a marketing firm was helping to figure out what message to put on a proposed billboard above the company’s new building when someone said, “Let’s put a big termite on the roof.” Boom! Right there was birthed the most amazing idea that would help sculpt the future of the company.

Originally, the Big Blue Bug was supposed to be purple, the true color of a swarming termite, but the purple paint kept fading to blue. It’s 920 times the actual size of a termite, constructed of steel and covered in fiberglass. Named Nibbles Woodaway in a local radio contest, the Big Blue Bug was so special that after 75 years in business, Stephan and his sons decided to change the name of the company from New England Pest Control to Big Blue Bug Solutions.

Nibbles has been showcased on “The Today Show,” “Oprah” and “Good Morning America.” He received an incredible 13 seconds of majestic aerial footage in the first “Dumb and Dumber” movie in 1994, and was included in the 2014 sequel, “Dumb and Dumber To.” He’s been featured in dozens of cartoons, and at least one tattoo. Numerous marriage proposals have been made under the approving landmark.

Nibbles has been featured in newspapers and magazine articles worldwide, and Rhode Island is proudly represented by the Big Blue Bug in a mural at the Denver International Airport. The extent of the coverage is huge; let’s just say Nibbles rocks, big time.

More importantly, the Goldmans take pride in the smiles, letters and drawings they get from children when the Big Blue Bug appears at various events (as a mascot in costume).

Nibbles, you’re a special bug, and you’ve got a special family to care for you well into the future.

You can reach Johnson, a past president of the National Pest Management Association (NPMA), president of Sevierville, Tenn.-based Johnson Pest Control, and founder of ACES for Business at ray@johnsonpestcontrol.com.