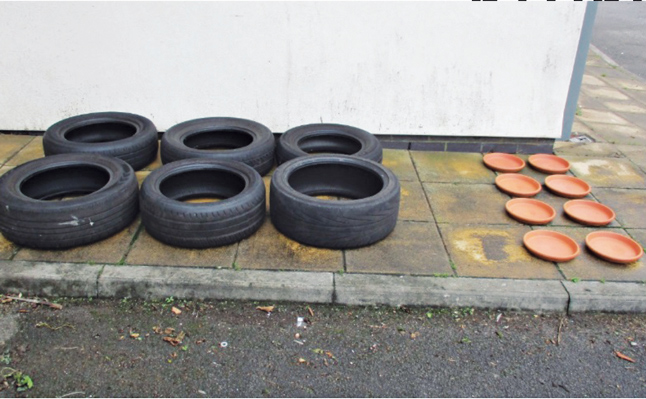 The tires and flowerpots drainage lids used in the MGK study. PHOTO: MGK

Let mosquitoes pick up where you left off, literally.

A Rutgers University study published by PLOS: Neglected Tropical Diseases in late 2016 looked at the feasibility of what’s known as the “auto-dissemination” approach to mosquito control. The approach is based on the possibility that adult female mosquitoes, exposed to breeding and resting sites treated with an insect growth regulator (IGR), through normal migration can spread (“disseminate”) the IGR to untreated larval habitats elsewhere on a property and thus decrease the probability of adult mosquito emergence.

MGK recently conducted a study that focused on confirming the occurrence of auto-dissemination with the use of NyGuard concentrate. The study also focused on the impact on adult emergence with pretreatments of OneGuard and NyGuard to potential breeding sites. The study was conducted by Dr. Richard Kinsey at i2L Research UK.

“We wanted to answer a question many pest management professionals have, which is ‘Why do IGRs work, and why should you pretreat for mosquito control?’” explains Tommy Powell, an MGK technical field specialist with a master’s degree in entomology from the University of Florida.

The first phase of the MGK study, which focused on pretreatments, required two new backpack sprayers, one exclusively for NyGuard treatments and one exclusively for OneGuard. The researchers sprayed dry tires and dry planter drainage plates, then let these objects “age” for 28 days in a greenhouse. After that period, they added mosquito egg-laden water to the tires and plates. The result? Every tire and plate that was treated with either NyGuard or OneGuard had zero adult emergence. The control objects, untreated, all had adult mosquito emergence. 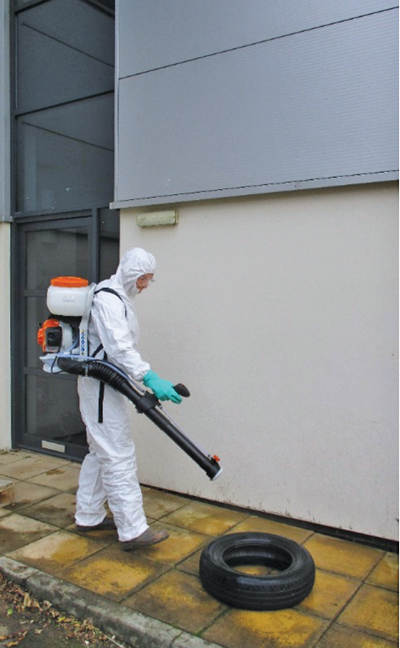 A researcher sprays NyGuard on a tire. PHOTO: MGK

“Our study demonstrates that when you pretreat with NyGuard or OneGuard, treated surfaces that eventually become breeding sites will retain enough pyriproxyfen — even after rain events — to inhibit adult mosquito emergence,” he says. “This could result in overall population reduction when enough breeding sites are treated.”

The higher the number of pretreated surfaces, the study found, the higher the probability of transfer of pyriproxyfen to those unseen and untreated breeding sites.

“It’s pretty exciting stuff,” says Powell. “If you pretreat a backyard with either NyGuard or OneGuard, this study demonstrates that doing so will prevent mosquito larvae from becoming adults.”

The second phase of the MGK study focused on how much pyriproxyfen was disseminated by the female mosquitoes. This study used the same methods as the previous study. However, this study only focused on the transfer of NyGuard and how much was transferred. Four untreated containers were placed around one treated container in an enclosed area. Mosquitoes were then introduced to the area.

“This is why you get better control when using an IGR,” Powell concludes. “The mosquitoes are transferring the product and as a result, inhibiting adult mosquito emergence.