Spiders can jump how far? 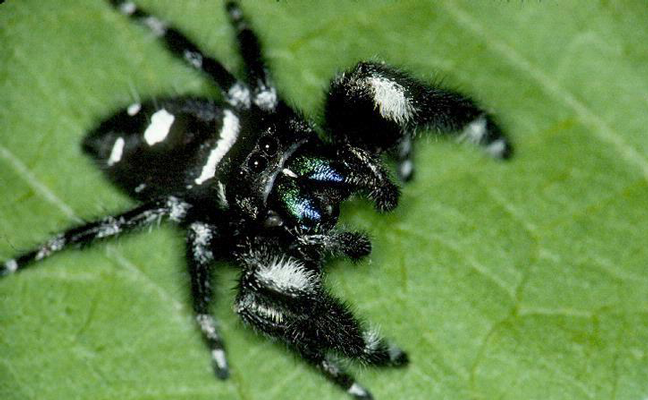 Unsurprisingly, the common name of the spider that was studied, Phidippus regius, is the jumping spider. Photo: Florida Division of Plant Industry, Florida Department of Agriculture and Consumer Services, Bugwood.org

Humans can jump pretty far, but spiders can jump even farther to catch their prey.

According to ValueWalk, some spider species hunt by jumping on their prey instead of spinning a web.

The average spider typically uses spinnerets to create elaborate webs to capture their prey, but scientists from the University of Manchester are now finding in a study of Phidippus regius, also known as jumping spiders, that some spiders are able to jump up to six times their body lengths. By comparison, humans are typically able to jump one-and-a-half times their body length.

Dr. Mostafa Nabary, a researcher from the University of Manchester, told BBC News that spiders jump at a certain angle as to not take up too much energy. The scientists used high-speed cameras to watch how the arachnids’ legs were able to angle their bodies to jump so far.

Dr. Bill Crowther, co-researcher at the University of Manchester, says spiders can achieve an impressive jump when using muscle power alone. Other spider species use hydraulic pressure that they build up in their legs to jump great distances.