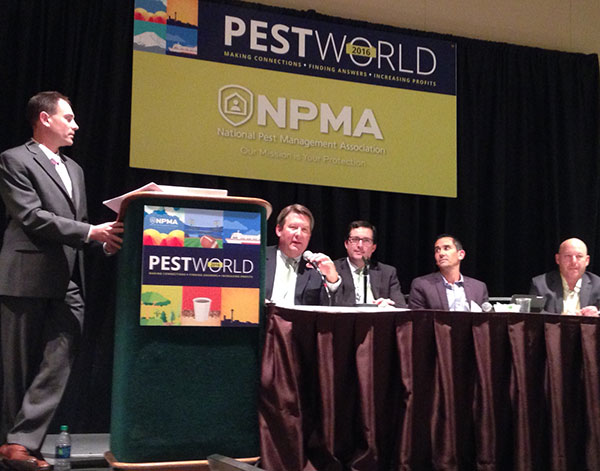 Lemasters (pictured second from right) continues to be involved in the industry as well, like this recent panel he was on for the National Pest Management Association. PHOTO: DIANE SOFRANEC

Our question-and-answer session focuses on Kevin Lemasters, president of Windsor, Colo.-based EnviroPest. In April, he was installed as an elected member of the Johnstown, Colo., Town Council. The Kansas transplant explains how he is tackling pest control and politics.

1. What made you decide to run for the Johnstown Council in 2017?

In the few years that I’ve lived in Colorado, I’ve had the opportunity to be the voice for my neighborhood at a few council meetings. Over that time, I built friendships with some of the members and our mayor, James Scott. During the same time, I was active in our local Chamber of Commerce.

In an effort to get my neighborhood more connected to the community, I organized an event with the town and Chamber of Commerce in my neighborhood. This effort earned me the honor of Citizen of the Year in 2017.

I share all of this for background, because prior to living here, I had never even attended a city council meeting before. But as a member of the National Pest Management Association (NPMA) Public Policy committee, the opportunity to serve in a legislative capacity seemed to be a natural fit. The mayor and a couple of council members recommended I run for office as well, so I believed it was the right time to take that step. But if someone would have told me four years ago I would be running, I would have laughed.

2. How are you balancing your duties of being an elected official with being president of EnviroPest — as well as making time for family and yourself?

My children are both grown and living back in Kansas, and I think my wife, Kimberly, enjoys the evenings on her own. She has always supported the things I get involved in. At EnviroPest, I am blessed to have a great team that knows what needs done and takes care of it.

It helps that my town is small enough that we only meet twice a month. The time it requires of me is minimal at this point. We are a rapidly growing community, however, and I expect the demand to change in the next three to five years.

3. If you had to do it over again, what would you do differently?

I had the opportunity to be appointed to council last summer when a vacancy arose. At that time, I still wasn’t entirely sure I was ready to take the step onto council. So, I don’t think I would have done anything differently.

4. What has been your favorite thing about this experience so far?

Having the community that I represent reach out to me with concerns and questions, knowing they can trust I will respond. We have had a couple of challenging issues arise, and hearing the concerns of my constituents reminds me that there are many ways to look at and approach issues.

5. What would you say has been a surprise about the position?

It has been refreshing to me that at the city level, politics are still mostly non-partisan. I’ve built friendships with council members from other cities, and it is the same with them. In a time where politics are so divided, I appreciate working with a group of individuals that, for the most part, aren’t making decisions based on party politics.