Why fly species ID was — and is — important 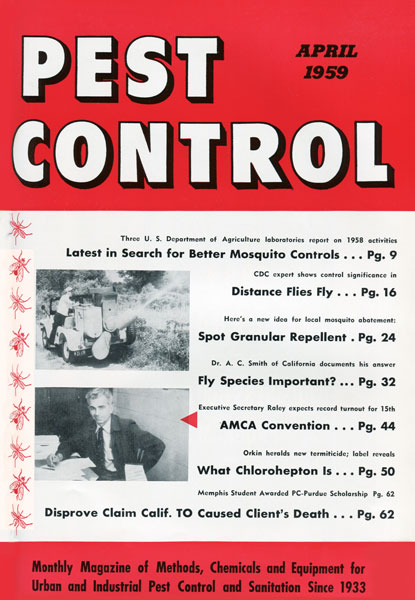 In the April 1959 issue of what was then known as Pest Control magazine, Dr. Arthur Smith tackled “Fly Control: Is Species Important?” At the time, Dr. Smith was a technical fly consultant for the Bureau of Vector Control, California State Department of Public Health, Berkeley. His 60-year-old article introduction would not be out of place today:

Many flies may superficially resemble each other, but they might differ greatly in biology and habits. The most common flies may be identified with a simplified “identification key.” For identification of others, seek assistance from experts in your own area, such as college or university entomologists, extension service entomologists, county agents, sanitarians assigned to fly work, or entomologists working for state agencies.

Dr. Smith then goes into a fictional account of a technician, “Joe Jones.” Joe treated a local commercial dairy for flies with an aerosol and residual, only to have two callbacks. It was only then that Joe collected specimens, and learned he was dealing with the lesser house fly (Fannia canicularis) — a species more commonly found in chicken manure than in dairies, according to the author. Further sleuthing by Joe revealed the dairy owner’s brother-in-law owned the poultry farm about a quarter mile up the road, with a lesser house fly infestation numbering in the millions. Dr. Smith surmises:

With better fly control measures (in this case easily arranged by an agreement between brothers-in-law) at the poultry farm, spraying at the dairy became worthwhile … [But] until the fly species was identified and the knowledge of its habit and biology put to use, there was no foundation on which to base a reasonable recommendation.

Dr. Smith goes on to recount three more stories of mistaken fly species identity, in which what would seem to be an obvious treatment would never have been successful because of the differences in behavior and biology. A PDF of his original article can be found here, and is worth the read. He concludes with three bits of advice (although we say proceed with caution if you’re thinking about implementing No. 2):

1. Rapid spraying for fly control is money down the drain unless efforts are also directed toward eliminating the sources of the flies. With effective source reduction, a regular program of chemical control becomes a worthwhile investment for your customers.

2. In order to promote fly source reduction, the progressive [pest control operator, or] PCO should take an active interest in community fly control programs. Volunteering a free fly and mosquito spray job as an emergency control measure at annual picnics in the city park may pay off handsomely, if not in direct business, in good will public relations and future business …

3. Successful fly control must be based on correct identification of the fly species and application of full knowledge of the fly’s life history and habits. Maintaining the attitude that a “fly is a fly and that it makes no difference what kind it is because we kill them all anyway” is a sure sign that your fly control methods will fail to give anything but temporary relief. Those customers are not likely to be repeat customers and they are quite likely to discourage others from coming to you.