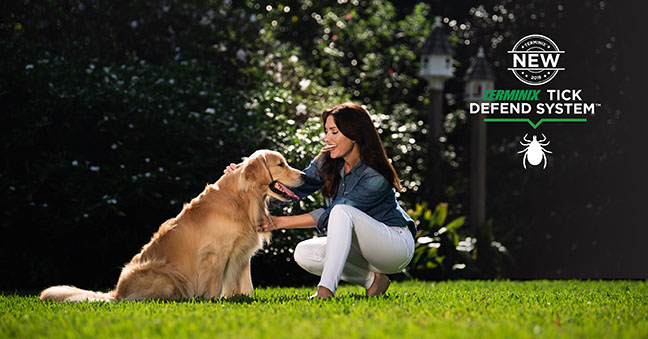 Terminix is partnering with Genevieve Gorder (“Trading Spaces”), a celebrity designer who lives with Lyme disease, for the product release. In recognition of Lyme Disease Awareness Month in May, Terminix will donate 10 percent of proceeds from its new Tick Defend System during the months of May, June and July to the Global Lyme Alliance to help raise awareness of the tick-borne illness and how to guard against it.

“I know firsthand how devastating the impacts of Lyme disease can be,” says Gorder in a press release. “I’m excited to be working with Terminix on the launch of their Tick Defend System, which underscores the importance of tick protection while supporting the critical education and research made possible by Global Lyme Alliance.”

The Terminix Tick Defend System is available as a one-time treatment, or as a monthly package for long-term protection. Customers are also able to combine the system with other Terminix pest and mosquito services, such as the Terminix Quick Guard Mosquito Service.

“We are committed to providing cleaner, healthier and safer environments to our customers. We fully understand our customers’ concerns about keeping their families protected from ticks and the diseases they can carry,” says Matthew Stevenson, president of Terminix Residential, in a press release. “We have seen tick-borne disease cases increase and have strengthened our efforts to bring effective solutions to our customers.”

The partnership and product launch come as incidence rates for Lyme disease continue to rise. In the past two decades, the reported number of Lyme disease cases in the United States has tripled. Reports from the Centers for Disease Control and Prevention suggest the disease is more common than reported, infecting approximately 300,000 Americans nationally each year. About 75 percent of Lyme disease cases are associated with activities around the home such as play, yard or garden work.