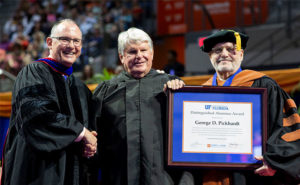 The University of Florida (UF) Institute of Food and Agricultural Sciences (IFAS) presented George Pickhardt with the Distinguished Alumnus Award at the spring student recognition ceremony for the UF/IFAS College of Agricultural and Life Sciences (CALS) in Gainesville, Fla.

Pickhardt is chairman of the board of Environmental Pest Service (EPS), and remains heavily involved in volunteer activities both in service to UF and his local community. The award is one of the highest honors bestowed upon a graduate of the university and recognizes recipients who have excelled in their chosen field or have performed outstanding service for the university.

“As a result of Mr. Pickhardt’s dedication and interaction with the University of Florida, his business has grown, his community has prospered and been beautified, the pest service industry in Florida has developed a high degree of professionalism and students in the College of Agricultural and Life Sciences have benefited,” says PMP Hall of Famer Dr. Phil Koehler, a professor in the UF/IFAS entomology and nematology department, in a press release. “He has had and continues to have profound impact on the lives of many, both at the University of Florida and in his community.”

Pickhardt earned his bachelor’s degree in entomology in 1969, subsequently earning his master’s degree in 1971 with a focus on ornamental horticulture. He joined the family business, Arrow Environmental Services, and took over leadership from his father in 1988. Later, Pickhardt earned an MBA from UF in 2005.

After the economic recession in 2008, Pickhardt restructured his company business model and formed EPS. The company began acquiring other pest and lawn businesses. Today, 85 companies and more than 500 employees are part of EPS. In 2016 and 2017, EPS was recognized as a Gator100 company, a select group of the 100 fastest-growing, Gator-owned or Gator-led businesses in the world.

Pickhardt’s community involvement in southwest Florida includes his roles as founding director and former chairman of the Florida Shores Bank-Southwest, current chairman for Premier Community Bank in Manatee and Sarasota counties and immediate past chairman for Venice Regional Medical Center.

Pickhardt and his wife, Jean, also invest their time into other local boards, including the YMCA, United Cerebral Palsy of Southwest Florida and Girl Scouts, among others.

“George Pickhardt is a true servant leader, one who strives in all his affiliations to make the world a better place,” says CALS Dean Elaine Turner. “I am proud to call him a graduate of the college, a trusted adviser, friend and now a Distinguished Alumnus of UF.”