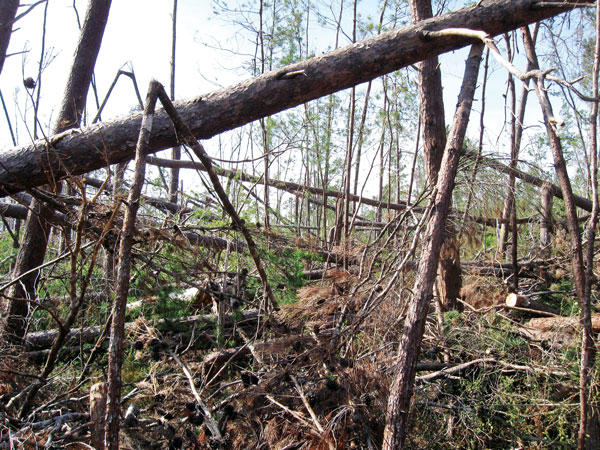 Fig. 1. Chipola Experimental Forest conditions after Hurricane Michael swept through in October 2018. This photo was taken in April 2019. PHOTO: USFS

On Oct. 10, 2018, Hurricane Michael — a Category 5 hurricane — made landfall in Bay County, Fla. The county contains both the tourist destination Panama City, and more importantly to this discussion, the Chipola Experimental Forest (CEF), one of three sites at which the U.S. Department of Agriculture’s (USDA) Forest Service (USFS) conducts its termiticide testing program. Located in northwestern Florida, the CEF has been a testing site since the early 1970s. Satellite photos taken of the CEF following the storm showed the specific area where the termiticide studies are located suffered a great deal of damage.

By comparison, the effects of Hurricane Katrina — a Category 4 hurricane — as shown in pictures from the annual report published in early 2006 in what was then Pest Control magazine, showed a considerable loss of canopy, but not a complete loss on the Harrison Experimental Forest (HEF) near Gulfport, Miss. The canopy loss at the CEF after Hurricane Michael was nearly complete (see Fig. 1) in the areas where the studies are located. Figs. 1 and 2 provide an unplanned comparison between the conditions of the forest and canopy before (see Fig. 2) and after (see Fig. 1) Hurricane Michael, although the picture locations within the forest are different: Fig. 1 was taken near our plots, whereas Fig. 2 was taken farther south into the CEF.

In our last annual report (see Pest Management Professional’s May 2018 issue), we discussed the ongoing efforts to manage the experimental forests where these plots are located. In that report, the HEF was being cleared of old concrete and materials, making way for possible new studies and clearing away some of the undergrowth that had become a problem since Hurricane Katrina hit in 2005. The first week of April 2019, several members of the USFS termiticide testing program went to the CEF to clear away hurricane debris and read those studies still under consideration. All of the photos in this report, except Fig. 2, are from that visit. 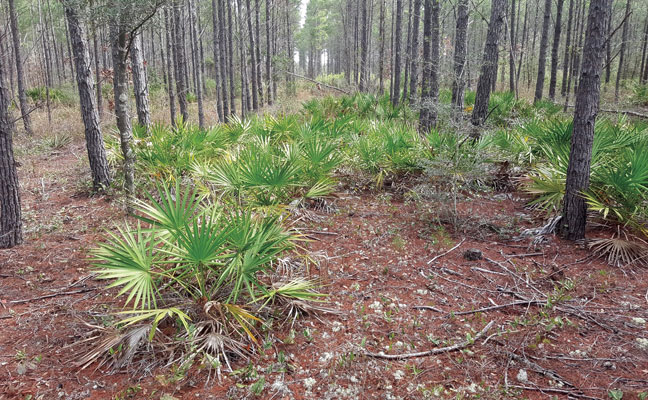 Fig. 2. Chipola Experimental Forest in February 2018, six months before Hurricane Michael hit. This spot is farther south than that which is shown in Fig. 1. PHOTO: USFS

The good news is that most of the active plots could be read once the areas were cleared. Fewer than 5 percent of the plots were lost due to Hurricane Michael, and after clearing, they are now available for reading until those studies conclude in several years.

Clearing the area was not a simple accomplishment, however. The work involved not only our staff, but also several national forest employees from the Apalachicola National Forest and the Southern Research Station to help with the clearing process. Figs. 3, 4 and 5 provide more detail of those efforts.

The timber on the majority of the CEF is being sold for salvage, and while this does not include the areas where the testing program plots are located, it will encompass nearly all surrounding areas, or about 900 acres. Even without the salvage operation, Figs. 1, 4 and 5 show a drastically reduced forest canopy compared to Fig. 2.

From our previous experiences on the HEF, we are aware that this will lead to natural undergrowth becoming denser as the years pass. While prescribed burning can help, it cannot be conducted over active plots due to polyvinyl chloride (PVC) pipes that would melt and the unknown effects of severe heat on termiticide viability. Any future products will require forest debris clearing before they could be installed on the CEF.

The year 2019 marks the 81st year of these studies, originally performed to supply data on protecting wooden structures and crates to the U.S. military. As in previous articles, it should be noted that originally only the groundboard test method was used (as described below), with the eventual addition of the concrete slab test method in the late 1960s. Today, these studies provide the U.S. Environmental Protection Agency (EPA) with the field data to support federal registration of new candidate products. Following federal registration, state governments also will examine the data, making their own judgments on the use of any particular product in their state.

In the 2018 cycle, no new products were installed at the USFS termiticide testing sites. As usual, this report also includes two tables providing data for the currently federally labeled termiticides on the U.S. market. Occasionally, a candidate termiticide manufacturer will decide to withdraw a product from testing.

Our policy has been to not report on any products that do not obtain federal registration; due either to withdrawal or a product’s failure to meet the EPA’s performance standards. This prevents confusion and possible off-label use of agricultural products that share the same active ingredient as a candidate termiticide that did not obtain federal registration. As a result, the numbers of studies currently active in testing usually will be greater than the actual number of reported products in the report tables. Currently, three candidate termiticides are being evaluated in the testing program. 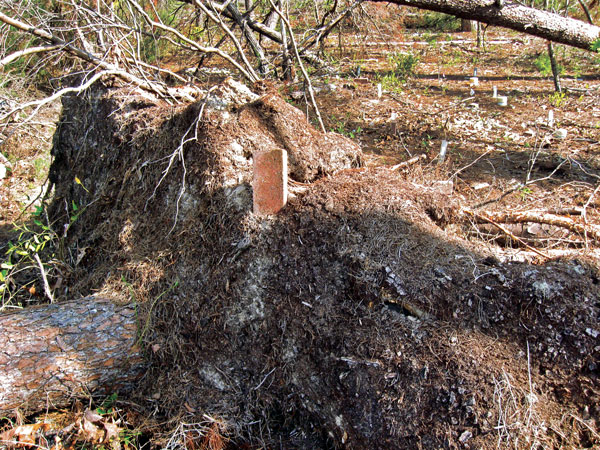 Fig. 3. In some cases, entire test plots were lost due to Hurricane Michael damage. PHOTO: USFS

The USFS termiticide testing program works with cooperators from the chemical industry seeking efficacy data to satisfy federal registration requirements for potential new (or candidate) products. We offer installation and reading of plots using the groundboard, concrete slab and stake methods, as well as pesticide residual soil samples as an unbiased third party.

These methods are the same as dictated by the EPA’s OPPTS 810.3600 document. This document requires efficacy data for candidate products for five years; therefore, these studies take six years from product installation to completion. Each year, we provide product manufacturers with updates on their product’s performance.

Our final reports of the data to the manufacturers are included in their registration package sent to the EPA. Upon receipt, the EPA, as well as state regulatory agencies (once the product obtains federal registration) are free to contact the USFS regarding the data or methods used to obtain them.
Since 1938, the USFS termite testing program has used a variety of national sites and one international location for these studies. Besides CEF, which was mentioned at the beginning of this article, test sites also include the Harrison Experimental Forest in southern Mississippi, and the Calhoun Experimental Forest in western South Carolina. Native subterranean termite species belonging to the genus Reticulitermes occur at these sites, thus our test data only applies to members of this genus.

Over time, many sites have been dropped because of various considerations, most commonly due to similarity of soils. Land exchanges also have caused the loss of sites, notably the Panama Canal Zone and Midway Island locations. We are currently attempting to find additional federal sites containing termite pests other than Reticulitermes spp.

The EPA’s Product Performance Test Guideline – OPPTS 810.3600 specifies two protocols for testing these products: the groundboard test and the modified groundboard, or concrete slab, test. Ten replicates of each concentration, including water-only controls, are installed for each candidate termiticide in each of the three national field sites.

For the groundboard test, a 17-inch-by-17-inch area is cleared of debris, roots and rocks, and treated with the candidate termiticide. After drying, a 6-inch-by-6-inch-square pine sapwood board is centered on the exposed, termiticide-treated soil, and held in place with a brick.

The concrete slab test is very similar. In this test, the treated plot area is also 17-inches-by-17 inches square and cleared as described above. After treatment, the soil is covered by a polyethylene vapor barrier, and a 21-inch-by-21-inch concrete slab is poured around a 4-inch-diameter PVC pipe placed at the center. Once the concrete has set, the vapor barrier is cut out and removed from the bottom interior of the pipe, and a 3.5-inch-by-2.5-inch-by-1.5-inch rectangular pine sapwood block is placed on the treated soil at the bottom of the pipe. To prevent weathering of the treated soil, a PVC cap is placed on the pipe. Completed plots form a grid in the forest.

For both methods, solutions of candidate termiticides are applied to the soil at the pre-construction rate of 1 gallon per 10 square feet in both test types. For each plot, the wood is evaluated for termite damage annually using the Gulfport scale, and the presence or absence of live termites infesting test blocks or boards is noted. 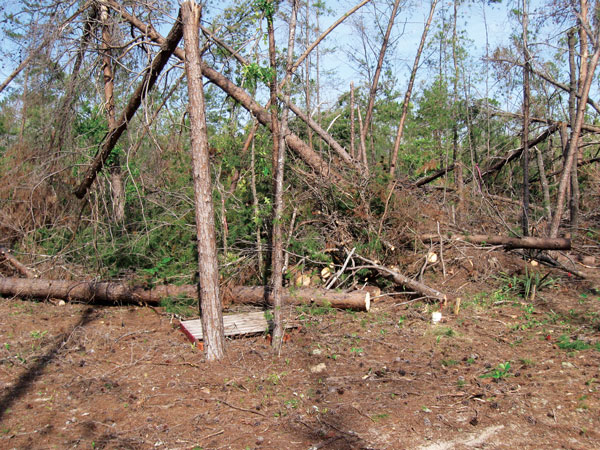 Since 1998, the testing program has included extra groundboard and concrete slab plots for pesticide residue analysis at each concentration level of a newly installed product. Soil sample cores are 1 inch in diameter and 4 inches in length, collected both after installation and on each subsequent year of the study. The groundboard and concrete slab plots designated for soil samples, however, have no wood blocks in the plots, so they are not read for termite damage.

As has been reported in previous annual termiticide reports by the USFS (see PMP’s April 2016 issue and all earlier USFS annual termiticide reports), there is a single standard for federal registration under the EPA, and each state has the opportunity to create its own standard. As mentioned in the primer section above, the lead agency for structural pest control in each state makes decisions regarding the use or sale of a product via either a state-specific regulatory standard (such as the Florida Termiticide Efficacy Rule, 5e-2.0311, FAC), or its own judgment of the USFS efficacy data on the product. Many state lead agencies choose to make these decisions collectively through the Association of Structural Pest Control Regulatory Officials (ASPCRO).

For the USFS annual termiticide reports, the data in Table 1 and Table 2 are presented for each site individually, as evaluated using the EPA guideline, and as an example of a state standard, the Florida Rule (individually by site and collectively across all southeastern sites). Discussions of the differences between the two standards have been covered in many of the past annual reports (see PMP’s April 2016 issue and all earlier USFS annual termiticide reports). 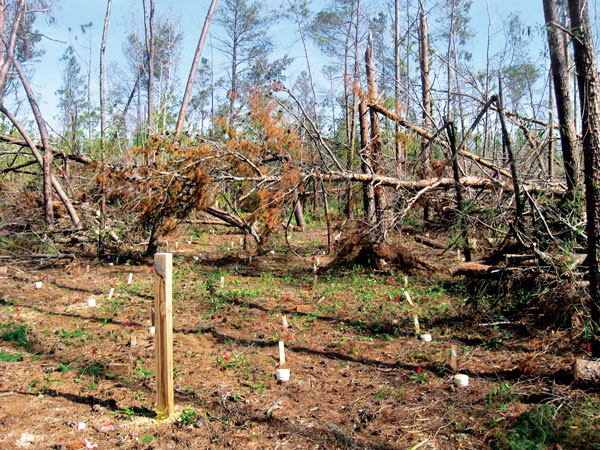 Fig. 5. Once they were cleared by the USFS team in April, affected plots were able to be read. PHOTO: USFS

Table 1 and Table 2 provide repellent and non-repellent termiticide evaluation results collected through 2018. All currently available soil-applied termiticide products have had their studies closed at the request of their respective manufacturers. No new products entered the market in 2018. Thus, there are no new products whose data can be revealed in this year’s report. The tables and data in this report are exactly the same as the previous reports (see PMP’s May 2018 issue and PMP’s May 2017 issue), as all of our newly collected data are for as yet unregistered products. See more here.

Annual reports such as this one provide the same data to the pest management industry, pesticide manufacturers, government regulators, and the American consumer. By making this data publicly available, the USFS enables people to make informed decisions concerning the protection of the wood framing in their homes and outdoor structures from termite damage. For the foreseeable future, the USFS termiticide testing program will continue to provide information about these products.