When we asked Pest Management Professional’s contributors and Editorial Advisory Board members to tell us their best tip for tackling a cockroach job, we also asked them to share an anecdote about their most unusual cockroach accounts. Following are recollections from a few of our experts: 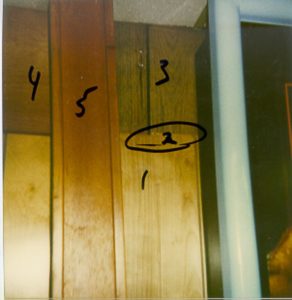 Frank Meek, BCE: I guess it was in the early 1990’s, when I was a commercial pest control technician on a night route in downtown Atlanta. A new account was assigned to me one night. A well-known fried fish restaurant had a significant German cockroach problem. The photo shown was from that initial service, and I still use this photo today in training. The numbers represent the layers of wall coverings. In this facility, with all the airborne grease and oil from the cooking, the cockroaches were in between each layer of wall covering. The facility changed management, and the new manager wanted to make changes in the appearance. So, instead of removing or cleaning the wall covering, they simply placed another on top of it, which created safe harborage where pesticides could not reach. We had to resort to a low-level fumigant, dichlorvos commonly known as DDVP, injected into the walls while prying apart the layers.

Michael Broder: When dealing with cockroaches, you have to remember they can live in anything that can create a crack or crevice. You must be curious and check every possible area from ceiling to floor. The first infestation I ever found in a restaurant was not in the kitchen or in any of the usual areas you would expect. The client continued to find cockroaches in the dining room. I checked every possible part of the area — under the tables, chairs, waiters’ stations, baseboards — but couldn’t find anything. When the client kept reporting cockroaches in the exact same area, I rechecked everything and still found no activity. Finally, I broke everything down in sections, making sure I didn’t miss anything, and then finally found the cockroach nest in the metal Exit sign near the ceiling.

Judy Black: At a resort property, there were ongoing sightings. But we were not finding “infestations,” just one-off sightings. Finally, we were there at night when the cleaners were cleaning and saw a German cockroach come off the mop bucket. We inspected the mop bucket, and it was infested. We asked, “Where do you store these?” We went to the basement storeroom and there were, no kidding, German cockroaches covering the walls and all the cleaning equipment. Even if we had sprayed with a non-repellent product, just the spraying would have caused them to spread to adjacent rooms. Three of us went in with vacuums and just sucked them up first. Then, the pesticides were basically a mop-up operation (pun intended). As Doc Frishman used to say, rapture of the capture!

Judy Black: At a restaurant, we completed multiple cleanouts and inspections and never found more than a single cockroach. Most of the time, we found nothing. There were regular sightings from the staff in one particular area. We even opened up the wall in that area and found nothing. It was very frustrating. Finally, the client called in again, when I was pretty close to the location. Even though it was right during lunch, I said I was coming; I wanted to see it at roughly the same time of day they saw it. Right in the exact area of all the cockroach sightings, the staff was storing their purses on an open cabinet shelf on the prep line. Even though it was against the rules and I had already asked about whether that was a possibility; they said no. I was always there at night or early in the morning. A quick, very cursory inspection of the outside of the purses showed that two had signs of cockroach activity. The facility instituted a policy — at our recommendation — for personal items to be put in large zip locks (U-Line is one distributor where they can buy them) and that they needed to be kept in a specific — already designated — area that was away from food areas.

Dr. Faith Oi: A school kitchen looked very clean, and yet a few cockroaches kept popping up during consecutive inspections. We smelled our way to the sources: a dropped ceiling and an electrical box. We used bait to finish control. The lesson: Use all of your senses!