During October, Brooklyn, N.Y.-based Colony Pest Management team members are wearing the Colony signature pink hat to help bring awareness to breast cancer. Colony will also donate money to breast cancer research and encourages all of its team and customers to do the same. 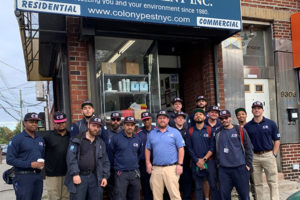 Colony team members have been recognizing Breast Cancer Awareness Month in this fashion since 2014.

“I decided a few years back, when cancer hit too close to home, that complaining about it and being sad is just not how I’m built. So raising awareness, donating and raising money seemed like the first step,” says Joe Sheehan, president of Colony Pest Management.

Following in the footsteps of his father Ed Sheehan (as seen on the Discovery Channel documentary by Morgan Spurlock, Rats), Joe Sheehan founded Colony Pest Management in 2003. Their family has been serving the New York tri-state area for more than 40 years. Ed ran his company Checkmate Exterminators for 27 years before selling it to Terminix International in 1998. Joe had worked part-time for Checkmate since he was five years old before starting his own company.

The father-and-son duo host their own biweekly podcast, “Colony Confidential,” in which they share, in an entertaining fashion, their success stories, toughest lessons learned, and dos and don’ts for running a small business and controlling today’s most problematic pests.

Colony Pest Management team members have organized a variety of other charitable initiatives. For instance, in 2016, they participated in No-Shave November for melanoma research awareness.