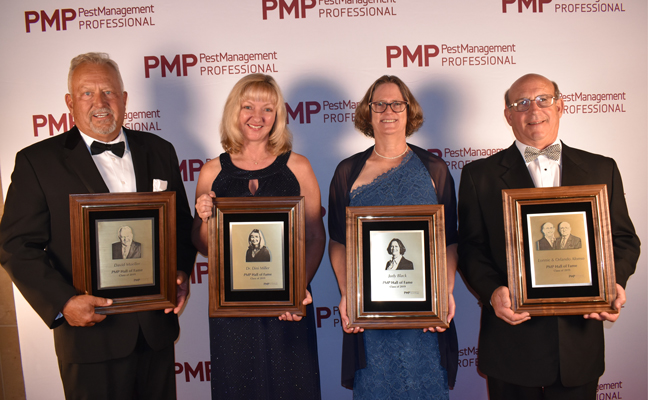 Pest management professionals, marketing partners and guests gathered at the Omni Hotel to honor five legends and innovators who have worked tirelessly for the betterment of the pest control industry.

See photos from the 2019 Hall of Fame induction ceremony

Lonnie Alonso, Columbus Pest Control, Columbus, Ohio, and his father, Orlando, who passed away in 2002, were the first inductees honored. Both have been well known and respected throughout the pest management industry, especially in keeping up with state and national regulatory affairs. Lonnie currently is the Ohio state policy affairs representative (SPAR) for the NPMA. A native of Cuba, Orlando built a successful pest control company, National Fumigating Co., there but left it behind to emigrate to the United States in 1961, to flee Fidel Castro’s rule.

“I don’t even know what words to use to tell you I’m up here to receive an award along with my father is the epitome of greatness for me because there’s nobody in this world that I think more of than my father and my mother,” Lonnie said as he accepted his plaque. “Mom and dad took a risk, and that risk was to bring us freedom. Freedom was more valuable than anything else, and I live that every day.”

Lonnie thanked many of the people who helped him and his father pursue successful pest management careers, as well as his family. He also acknowledged those in the military for ensuring the freedom we enjoy every day.

“Never in my wildest dreams would I have ever thought that I would be mentioned or recognized here, so I’m still totally surprised, humbled and very thankful to be here with you all to be recognized,” he said.

Judy Black, BCE, vice president of quality assurance and technical service, Rollins Inc., Atlanta, Ga., previously served as vice president of North American technical services for Rentokil-Steritech. She also was chair of the NPMA’s technical committee; director of the certification board for the Entomological Society of America (ESA); and immediate past president of industry fraternity Pi Chi Omega. In 2012, she received the NPMA’s Women of Excellence Award. Black is known for her training and industry stewardship throughout the pest management industry.

“How fortunate I am to be in this industry,” she said. “I have received far more than I’ve given. After 33 years, there’s been a lot of days and a lot or weeks and months on end where I feel like I’ve given a lot, so if I say I received more, then it really means something.”

Black was humble as she accepted her plaque, saying, “I’m very fortunate to have worked with some of the best people in the industry. Some of them have stood on this stage before me and some could very well stand here after me and some may never be recognized in this way, and their contributions are no less than mine.”

She thanked her husband, John Edwards; her niece, Erin Black; and her boss, Rollins’ Vice President of Operational Support and current NPMA President Chris Gorecki, her guests at the induction ceremony.

“I’m absolutely positive that I would not be standing here today if I didn’t have the kind of support that I get from my husband John,” Black said as she wrapped up her speech.

“This is an amazing honor to me,” Dr. Miller said. “If you had known the person I was when I was 20 years old, you would be just as stunned as I am that I’m standing up here.”

Indeed, she touched on her upbringing and how “one fortunate occurrence after another” led to a successful and rewarding career in the pest management industry.

David Mueller, BCE, founder of Insects Limited and Fumigation Service & Supply, Westfield, Ind.  He launched Insects Limited in 1982 with a focus on researching, testing, developing, manufacturing and distributing pheromones and trapping systems for insects in a global marketplace. Before the U.S. methyl bromide phaseout began in 2005, Mueller and his team worked tirelessly to find alternatives, so that food commodities could be protected for public health. Now retired, Mueller spent his career seeking successful pest management and prevention with fewer chemicals.

The 1975 Purdue University entomology graduate recognized Dr. John Osmun for being an important mentor who encouraged him to participate in what is now known as the Board Certified Entomologists program. “[He] said, ‘Son, let’s get professional.’ That’s the kind of encouragement you got out of him …  [he talked] to you as if he was your best friend,” Mueller recalled. “What a great individual.”

Mueller also acknowledged Alain VanRyckeghem, who passed away from brain cancer two years ago. He worked for Insects Limited for about 20 years,  and he was known in the industry as a world-class stored product entomologist. “I want to recognize him tonight because he was such an important part of our company,” Mueller said. “Alain, we miss you.”

He concluded his remarks with a toast “to the bugs.”

Also honored this evening was Dr. John Osmun, a member of PMP‘s inaugural Hall of Fame in 1997. Born in 1918, he played an unparalleled role in almost every facet of the pest control industry including researcher, educator and regulator.  Dr. Osmun became chief entomologist for the First Army, and started working side-by-side with pest management professionals, testing Geserol — DDT — on the rampant bed bug populations in the barracks. In 1948, Dr. Osmun was hired by Purdue University as an assistant professor of entomology. He was tasked with developing a new curriculum in structural pest control, and by fall of that year, created six new courses specifically for pest control professionals. Under his direction in 1950, several of his students formed the pest control industry fraternity of Pi Chi Omega. In 1956, Dr. Osmun was named head of entomology at Purdue, a title he held until 1972. In 1971, he founded the American Registry of Professional Entomologists, which has since evolved into today’s Board Certified Entomologists program. In 1972, Dr. Osmun reviewed university entomology programs under the auspices of the U.S. Department of Agriculture’s Cooperative States Research Service. Later, he served as director of pesticide operations for the fledgling United States Environmental Protection Agency. He added on the role of Purdue professor again in 1975, and retired in 1987. Dr. Osmun passed away in 2012 at age 94.

PMP Hall of Famer Dr. Gary Bennett (Class of 2006), who who retired in June as executive director of Purdue’s Center for Urban and Industrial Pest Management, gave attendees a glimpse of what it was like to know Dr. Osmun.

“He was a teacher, a scientist, a mentor, a leader and really a very kind and generous person. Those of us who worked with him had the opportunity to experience of those qualities,” Dr. Bennett said.

“He had an impact on so many people, so many [pest management] industry folks,” he added. “He was a gentleman and a scholar, and he represented this industry well.”

Each PMP Hall of Fame inductee received a plaque commemorating the honor. An identical plaque will be displayed on the walls of Purdue University’s Smith Hall. Dr. Bennett has overseen their installation, made possible by PMP Hall of Fame Platinum sponsor Bug Off Pest Control Center, for decades.

To learn more about the PMP Hall of Fame and past inductees, visit PMPHallOfFame.net.

The PMP Hall of Fame induction ceremony is an annual event. To nominate someone in the pest management industry, submit a nomination form.