Why Pest Solutions is feeling festive 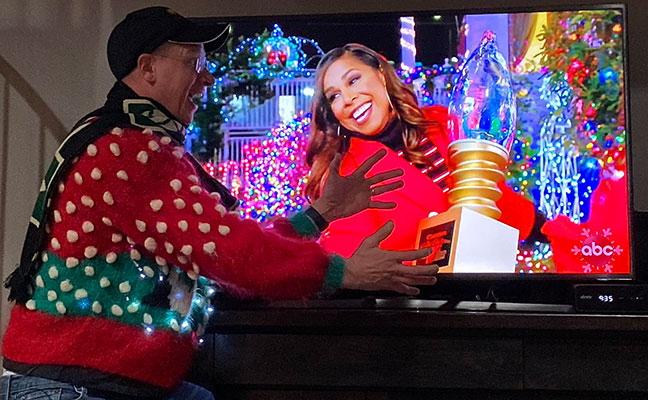 Does anyone want to remind Eric how TVs work? PHOTO: LIGHTING SOLUTIONS

Normally in this space, you’ll find me talking about industry stuff I’ve found on the Internet that I thought might make our readers chuckle (or give pause, or celebrate, or get angry over — all depending upon your point of view). This week is a little different, as the subject matter came to me before I could stumble upon it while literally “crawling the Web.”

Eric Ufer is president of Pest Solutions in Beaverton, Ore., and a 2019 PMP Growth Summit attendee. (You might recall our August issue’s profile on his use of alternative-fuel vehicles in his fleet, among other company innovations.) Earlier this week, he emailed me to let me know how his Lighting Solutions division —  which helps keep his pest control team employed during the off-season — got some huge publicity in a really fun way.

“On ABC Monday nights at 8 p.m., there’s a series called The Great Christmas Light Fight,” Ufer said. “Last Monday, there was a house on from Portland, Ore., and our team put up pretty much all the lights on all the trees and structures, including the primary house on behalf of one of the contestants, Gina.  She competed against three other folks and won $50,000 and a big trophy!”

Ufer said it was also a win for his business, since they had really just started Lighting Solutions in earnest in 2018.

You can check out the episode on various streaming platforms. Ufer notes the Portland segment starts around the 10-minute mark, and if you just want to skip ahead to the celebrating, go around the 37-minute mark (at least on Hulu, he adds).

But hey, why fast forward when you can catch glimpses of Ufer in the background throughout? You’ll know him, he says, because he’s wearing his “very ugly red sweater with LEDs in it, a scarf, and an elf ear hat.”

- Partnering with sports venues is a win-win for Pest Force
This article is tagged with add-on, Christmas, holidays, marketing, Oregon, TV and posted in Crawling the Web, featured