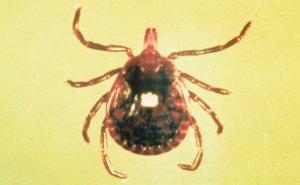 In 2016, our staff first learned about the red meat allergy that a Lone Star tick (Amblyomma americanum) can create in humans. Here’s how Pest Management Professional Hall of Famer Dr. Austin Frishman (Class of 2002) described it:

Imagine eating a steak or hamburger, and three to six hours later you experience swollen hands — which feel like your skin is on fire — or you break out in hives. Here is how it works:

Fast-forward four years, and this phenomenon is on the rise — identified in 17 countries across six continents. But according to a recent article in Popular Science, one good pest deserves another. In this case, imported fire ants (“IFA,” per the study) are capable of culling Lone Star tick populations. The study does not distinguish between red imported fire ants (Solenopsis invicta) and black imported fire ants (S. richteri), so we assume they grouped both species together. There is also the case to make that a hybrid of the species exists in some areas.

Dr. Platts-Mills does point out in the Popular Science article, “I really don’t think you want to swap ticks for fire ants. Their bites are incredibly painful, and can kill babies and small children.” Still, the study found that cases of alpha-gal allergies are much lower in areas with RIFA populations — as much as 90 percent lower. In the U.S., both the ticks and IFA are making their slow creep north as mild winters continue.

What does that mean for PMPs? It underscores the industry’s position of protectors of public health — from bites, stings, and the freedom to eat meat without fear.