The members of the National Pest Management Association’s (NPMA’s) State Policy Affairs Representatives (SPARs) program were recognized at a Zoom meeting titled Recognizing Super SPARs: The Frontline Defenders of Our Industry held during PestWorld 2020 the evening of Oct. 14.

“The SPARs program represents a culture of hard work, service to the industry, and ultimately earning successful outcomes for the structural pest management industry so that we can continue to protect public health and property,” saidJake Plevelich, National Pest Management Association director of Public Policy, who led the meeting. “The NPMA SPARs dedicate countless time away from their families and businesses to bolster and defend our beloved industry.” 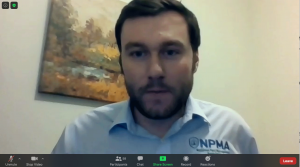 The Super SPARs recognized for the hard work offer the past year include:

Were it not for COVID-19, these SPARs would have been recognized at a Bayer Crop Science-sponsored reception during PestWorld. This year’s virtual meeting was similar in that it served to express appreciation to SPARs for their dedication and hard work advancing the cause of protecting public health and property.

He said the number of Republicans serving at the state level the past four years — governors, attorneys general, state representatives — will likely drop as more Democrats are elected this year. He also expects more legislation affecting the pest control industry this year. There have been more than 300 different pieces of legislation, with insecticides leading the pack, he said.

“This past year, we saw another record amount of bills get introduced in state legislative bodies that would prohibit, or somehow limit, our ability to use some of these highly regulated products,” Tierney added.

So, what will 2021 bring? “I assume we will have yet another record next year with more pieces of legislation introduced, and we’ll see where that goes,” he said.

PMPs who want to get involved can start by getting to know their local legislators. Unless you live in Nebraska, you have two members in your state legislature, and they represent you. “They will take your call long before they will take my call, and that’s a great thing,” said Tierney. “They know how they got in to office. They also know they will get out of office if they don’t talk to their constituents.”

Our regulatory system is set up so that state departments of agriculture have the final say on many of the products PMPs use, he added. They can approve a product’s U.S. Environmental Protection Agency-reviewed label for their state as written, or they can make more — or less — restrictive. “They want to hear from you. They are receptive to phone calls and emails.”

Michigan SPAR Bill Welsh recommended building a relationship with them before you have a concern, because they will be more apt to take your call when something happens.

For more information about the NPMA’s SPARs program, contact Plevelich.