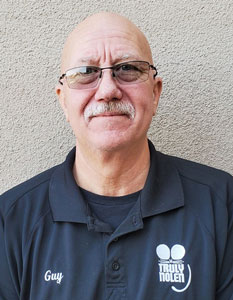 Based in Tucson, Ariz., Truly Nolen Pest Control has promoted Guy Halverson to manager of its service office in Santa Fe, N.M.

Halverson joined Truly Nolen in June 2019 as a manager-in-training. According to the company, he “has worked in the pest control industry since 1974 when, at the age of 16, he was the youngest licensed pest control operator in the state of Texas. In fact, as a teenager, Halverson actually met the late [Truly David] Nolen and had a brief, insightful conversation with our founder.”

“I met Truly at a national pest convention, and he made an impact on me because of his love of classic cars, as well as some advice he gave me regarding our industry and the Golden Rule,” Halverson said in a news release, referring to the concept of treating others as you would wish to be treated. “My dad and I have had a number of classic cars over the years, from a 1923 Model T to a 1953 Packard Clipper, so I am happy to bring my love of classic cars to the company Truly founded.”

Prior to joining Truly Nolen, Halverson’s extensive pest control industry experience includes work as a private consultant, preliminary inspector, and technical director for multiple pest control companies. His pest control lineage starts with his mother who was the first woman president of the Texas Pest Control Association in 1980. His career began with his family’s Bug-A-Boo Pest Control company in El Paso, Texas, where he developed and patented pneumatic dusting systems and expanded the commercial business to cover Texas and New Mexico. Halverson holds a master degree in entomology from New Mexico State University.

“Guy lives and breathes pest control as much as any person I have ever met, and his knowledge of our industry and attention to detail made him the perfect choice for this position,” District Manager Robert King said in the news release.