Lack of Lyme disease cases has unexpected cause 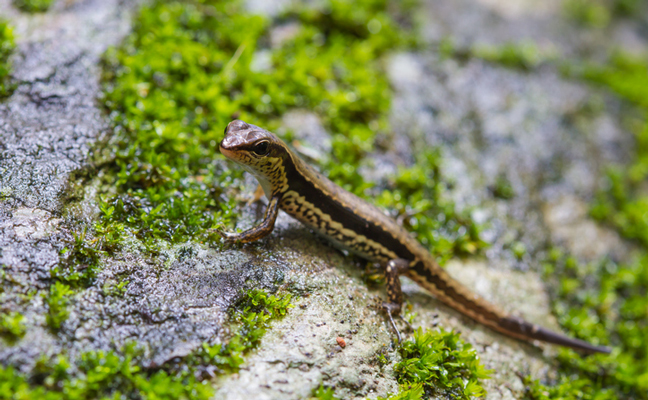 If the ticks that transmit Lyme disease are found in the northern and southeastern United States, why are cases more common in one region than the other?

If you answered lizards, you are correct.

Researchers set out to learn why, and had their findings published in a peer-reviewed article that recently appeared in PLOS Biology.

A person can contract Lyme disease from the bite of a blacklegged tick that is infected with the Borrelia burgdorferi bacterium.

In the north, small mammals such as mice, voles and shrews serve as tick hosts. In the south, reptiles such as skinks (Scincidae) serve as hosts to ticks. The hosts transmit Lyme disease to the ticks, and the ticks transmit it to people.

The blacklegged tick is “abundant in the northeastern and northcentral U.S., extending south into the Gulf states from Texas to Florida,” the researchers say. However, few Lyme disease cases are reported in the southern states.

The research shows reptiles are poor transmitters of the Lyme disease bacterium, which means fewer southern ticks are infected and so fewer people contract Lyme disease.

Skinks are “inefficient reservoirs” for the bacteria that causes Lyme disease, the researchers said.

“Infection of host-seeking ticks with Lyme [bacterium] declined from north to south, with a precipitous drop below the latitude of the state of Virginia,” their research showed.

Their research also indicated tick behavior in each region made a difference. Ticks in the north often were found on top of grass and leaves where they could easily hitch a ride on people, whereas ticks in the south stayed under leaves and out of the heat, they discovered.

The researchers concluded “selective host choice, along with latitudinal differences in tick host-seeking behavior and variations in tick densities, explains the geographic pattern of Lyme disease in the eastern U.S.”

Lyme disease is the most common vector-borne disease in the United States, according to the Centers for Disease Control and Prevention (CDC). Symptoms include fever, headache, fatigue and rash. It often can be treated with antibiotics, however an untreated infection can spread to a person’s joint, heart and nervous system and cause severe joint pain and swelling, inflammation of the brain and spinal cord.

People who have been outdoors should check their bodies, clothing and pets for ticks. Showering within two hours after being outdoors will help wash away any unattached ticks and make conducting a full body tick check easier.

The CDC compiles data on confirmed and possible Lyme disease cases from state health departments. A map on its website shows illustrates where cases have been most prevalent over the past 17 years; the majority of cases are in the northeast region of the country.