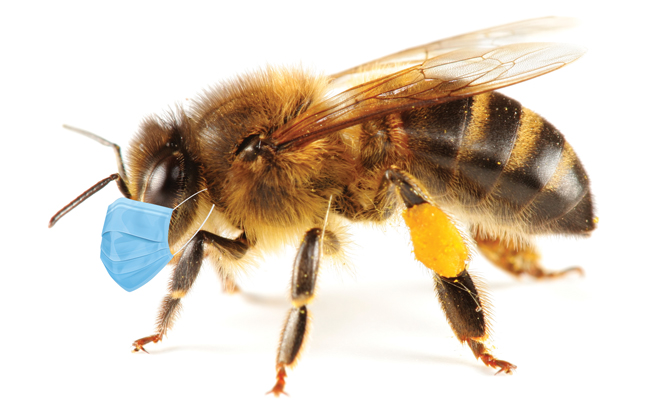 Just who is this masked social insect? Who could it bee?
ART: GETTY IMAGES: ARLINDO71/E+ (BEE), НАТАЛИЯ ГУСАРОВА/ISTOCK / GETTY IMAGES PLUS (MASK)

Find out the identity of “The Masked Stinger”

Pest Management Professional magazine (PMP): This month, we are going to broaden the scope a bit and talk about stinging insects in general. Previously, we discussed yellowjackets, but there are many common traits, and this is a good time of the year to show some similarities. I see you are wearing a mask. Is it a COVID-19 concern?
Stinging insect (SI): Nah. If any creatures know how to socially distance, it is stinging insects. The mask is an illustration that many stinging insect species have similarities.

PMP: Very nice prop. So, first, many people confuse biting with stinging. Please tell us the difference.
SI: In general, biting is what insects do by using mouthparts. In some species such as bed bugs, both males and females can bite, whereas stinging generally is limited to sterile female insects. The stinger replaces the ovipositor, which is why males do not sting.

PMP: Speaking of stings, supposedly more than 500,000 people visit hospital emergency departments each year because of them. Tell us about that.
SI: Most species are not aggressive, but we protect our habitat just like humans protect their homes. Step on a ground nest or disturb a European hornet nest, and we send out the troops fast. Considering that many species of stinging insects can sting repeatedly, compared to the European honeybee, which can only sting once, some people suffer anaphylaxis or other serious reaction. This can be fatal, unfortunately.

PMP: Yes, the Centers for Disease Control and Prevention reports nearly 100 people die from insect stings each year. Very sad. Along those lines, though, you portray stinging insects as nearly docile. Yet, a new species has been found in the northwest, nicknamed the “murder hornet” (Vespa mandarinia). That is not exactly a picture of docile.
SI: Well, we know Asian giant hornets can be vicious. They also are the largest stinging insect known; however, the term “murder” is more for this hornet’s aggressiveness when attacking other insects, such as honeybees — not so much humans.

PMP: If we are concerned about children playing outside near nests and a pest management professional is called to that account, what is the best way to keep children safe?
SI: First and foremost, take time to survey the area. Positively identify the insect. Not all bees and wasps are the same, and some “fearsome” insects are peaceful. Stumped on the source? Go back at dusk to get a better idea of the source. Then use control measures if needed, depending on the species and source and risk to humans.

PMP: Good advice. Knowledge is what we sell, rather than just applications of a product.
SI: Exactly. They go hand in hand.

PMP: Thank you for your time.
SI: Thank you for letting me share some information. (Takes off mask, revealing she’s a honeybee, or Apis mellifera). Now, if you see signs of any V. mandarinia around, please let me know, as I must protect my hive. Those giant hornets can really wreak havoc on us friendly honeybees!