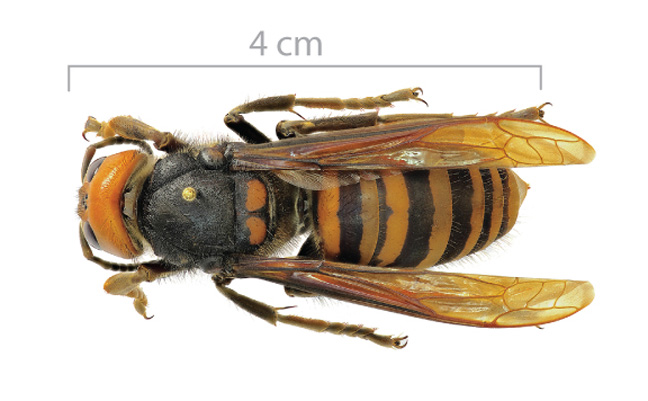 Entomologists at the Washington State Department of Agriculture (WSDA) have located and eradicated an Asian giant hornet (Vespa mandarinia) nest. The nest was eradicated by vacuuming the hornets out of the nest on Saturday, Oct. 24, just two days after finding the nest in a tree on private property in Blaine, Wash.

The WSDA’s Pest Program removed 98 worker hornets in total. During the early morning extraction, 85 hornets were vacuumed out of the nest on Saturday and entomologists collected another 13 live hornets with a net while observing the nest on Friday. The queen has not been located but it has been speculated that she may still be inside the sealed nest.

“The eradication went very smoothly, even though our original plan had to be adapted due to the fact that the nest was in a tree, rather than the ground,” managing entomologist Sven Spichiger said in a news release. “While this is certainly a morale boost, this is only the start of our work to hopefully prevent the Asian giant hornet from gaining a foothold in the Pacific Northwest. We suspect there may be more nests in Whatcom County.”

The WSDA entomologists wore special protective gear and suits when working to remove the nest. Asian giant hornets can sting multiple times, have a larger stinger and can deliver a more toxic venom than native bees and wasps.

Saturday’s operation began at about 5:30 a.m. with the team setting up scaffolding around the tree so they could reach the opening of the nest, which was about 10 feet high.

In the coming week, the WSDA Pest Program intends to cut the tree down and open it to see how big the nest was. The entomologists also want to determine whether the nest had begun to produce new queens.

The WSDA has been chronicling the Asian giant hornet process in a playlist on its YouTube channel.

WSDA has been actively searching for Asian giant hornet nests since the first hornets were caught earlier this year. The first confirmed detection of an Asian giant hornet in Washington was made in December 2019 and the first male hornet was trapped on July 29 of this year. Several more were subsequently caught, all in Whatcom County.

COO to retire from Sprague