Oh say, can you sebum 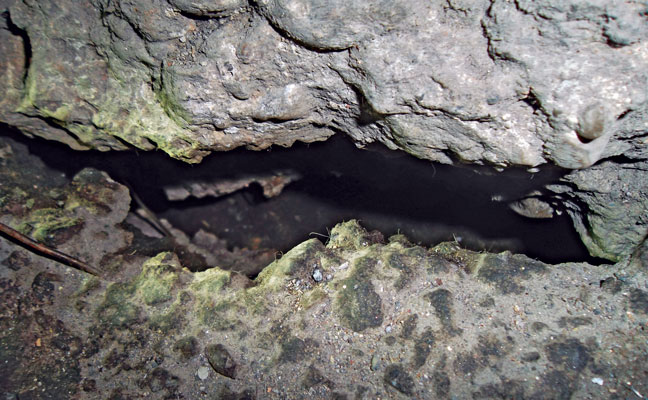 Hairs stuck to sebum around rat holes indicate recent activity. The pebbles in the concrete are dark with sebum accumulated over time. Photo: Mark Sheperdigian, BCE

Sebum is a major clue to rodent activity. Rodents never go anywhere without their sebum, and they always leave a little as a special gift for you.

Sebum is a secretion of sebaceous glands, which are common to all mammals. As rodents touch walls, pipes and other elements of their environment during travel, they leave a small amount of sebum on the surfaces they touch.

This secretion is waxy; it will hold dirt and take on a dark, smoky appearance. In basic rodent control, we learn the signs of rodent activity, aside from actual rodents, as droppings, gnawing and rub marks. Bats aren’t rodents, but they, too, leave rub marks that we can use to identify their entry points. Rub marks are sebum.

Success in rodent control hinges on our ability to recognize areas of activity. In fact, many rodent control failures can be traced back to incorrect assumptions when deciding where rodents are traveling.

Just as stalactites build up over time, sebum builds every time a rodent rubs up against a surface. It appears to the untrained eye as dirty smudges, but we learn to see it when we are looking for it. The accumulation can build to astonishing levels, and will also collect hair and other debris.

In an area with a lot of sebum in many places, the main runways will have the highest levels of accumulation. The keen observer can see the “emerging picture” of activity for both rats and mice. One indication of recent rat activity in a burrow or opening is the presence of hairs stuck in fresh sebum. These are quite subtle, and you have to look closely; it also helps to backlight the sebum with a bright flashlight. Fresh hairs will fall off, which makes them a good indication of recent activity.

Because it is most prevalent in areas of high activity, the sebum from mice can be found where they congregate. While there are a number of factors that attract mice, they gravitate to areas of warmth that are dark and quiet. As it accumulates, the mice use the odors in the sebum as cues, and it becomes an attractive influence.

Droppings are still an important indicator of activity, but they also have limitations. Roof rat droppings can be found at the floor level, even when all the activity may be many feet overhead. Sebum indicates the rats were exactly in that spot. It’s quite common to see sebum trails indicating activity, and yet no droppings.

There are many important keys to consistently effective rodent control, but correctly identifying areas of activity is basic. When you are inspecting an area for rodents, keep sebum in the front of your mind. If you can recognize sebum when you see it, rodent control gets a lot easier.