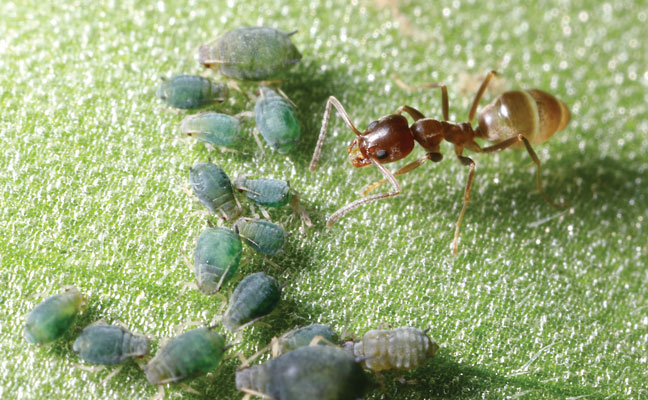 In other words, all the worst ants are tramp ants.

Tramp ant species aren’t closely related; rather, they are grouped together for their shared behaviors. They live in close association with humans and are easily spread by human activity.

Tramp ants are polygynous, meaning they have multiple queens. This allows them to easily split their colonies because a queen and a few workers are all they need. It also means swarming is not necessary, although some species may swarm when they are successful. Pharaoh ants are famous for fracturing their colonies in response to detectable contact insecticides.

Tramp ants are polydomous, having multiple colony sites. This goes hand-in-hand with polygyny, allowing the colony to easily split. If one satellite site is cut off from the others, it can become its own colony.

Tramp ants are largely unicolonial and exhibit no aggression between colonies. When they encounter other ants of the same species from different colonies, they work side-by-side or in harmony. Colonies that meet each other may fuse to form large, widespread colonies. Argentine ants can form supercolonies that stretch over city blocks, and even miles.

At the same time, tramp ants do not tolerate ants of other species in their territory. This is called interspecific aggression. Many of the tramp ants will drive out native species, which often are non-pest species. Tramp ants such as the Argentine ant and the tawny crazy ant are invasive species that have devastating effects on the local fauna.

When you consider these behaviors as a set, you can see why they are successful around human activity.
If a colony is split up or decimated by control efforts, they can grow into new colonies with whatever is left. They don’t compete among one another, but instead augment the other colonies they contact. They drive off other species of ants to reduce competition for resources.
Not every tramp ant species exhibits all of these behaviors all the time, but there are only a few exceptions.

Start by getting a confirmed identification to species. When new species show up, they often are misidentified at first. The ghost ant and white-footed ant seem to spread in North America only by human activity and may show up in your town quietly and unexpectedly.

Baiting is a good control method, but tramp ants may be slow to take baits; they may switch to a different food source before success is achieved. Be prepared to try several baits. Sprayable, non-repellent insecticides can be helpful for species that won’t accept baits.

Keep your eye out for small, monomorphic ants that ignore your bait and defy other control strategies. You may be dealing with tramp ants.