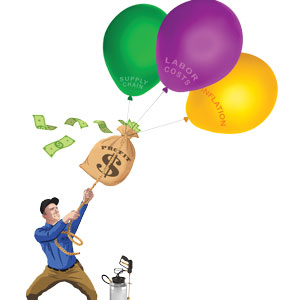 In March 2020, the U.S. Consumer Price Index (CPI), which measures the average change in a basket of goods and services the average American purchases, was sitting at a cool 1.5 percent. This means prices increased 1.5 percent over the prior year; in other words, inflation was at 1.5 percent.

In June 2022, inflation peaked at 9.1 percent due to pandemic-related government stimulus in the forms of transfer payments and forgivable business loans that pushed up demand. The last time inflation exceeded 5 percent was during the first half of the Great Recession in 2008.
Pest control, like other goods and services, also increased in price because of inflation. Most PMPs raised their prices at least 10 percent in 2022, meaning the real growth of the industry was more like 5 percent, rather than 15 percent, the percent by which the average company in the William Blair/PCO M&A Specialists Pest Index grew from January through September 2022. The pest control industry is growing, but inflation is eating up a lot of that growth and profit.

Because we haven’t dealt with this 40-year record inflation in a long time, there seems to be confusion and speculation about how to handle it. Everyone understands that inflation means rising prices. However, that is where the clarity about inflation usually ends. While those “rising prices” are a national average, the way inflation affects an individual business depends on its industry’s exposure to the goods and services it procures to produce its products and services. As a result, sometimes the strategy in dealing with inflation can seem confusing and contradictory.

Knowing how to prepare for and adapt to inflationary trends can make a business even stronger. Smart choices will help PMPs emerge with better businesses as inflation eases.

Most readers know I recommend best-in-class pest firms show a gross margin of 50 percent or better on the selling price of their services. Three of the major direct costs that make up the gross margin formula are labor, fuel and materials. As I write this article in December, we’ve seen these costs increase 25 percent, 100 percent and 50 percent, respectively, over the past two years. Table 1 on p. 24 shows how inflation has eroded our gross margin/profit. 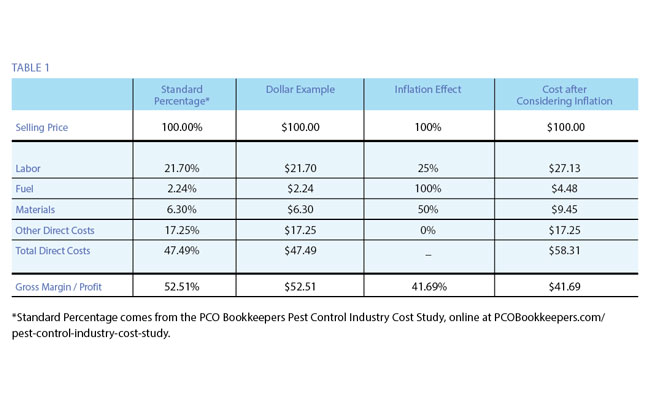 Based on the example shown in Table 1 we would need to increase our selling price more than 11 percent just to get the gross margin back to 52.51 percent. If we raise prices 11 percent, we beat inflation, right? Well, the discussion above addresses effects of inflation caused by the overall economy.

It doesn’t stop there. For example, have you checked your Google Ads bill lately? As Google leverages its marketing platform in many markets, the cost per lead (CPL) has increased significantly — in some cases, by 100 percent or more. This marketing inflation is making growth extremely expensive. Together, the macroeconomic environment and the higher price of advertising thanks to Google’s auction process have really squeezed margins. This means PMPs need to be more disciplined then ever in their approach to growing profitable and healthy businesses.

How should PMPs respond to inflation? Here are 10 strategies to consider: 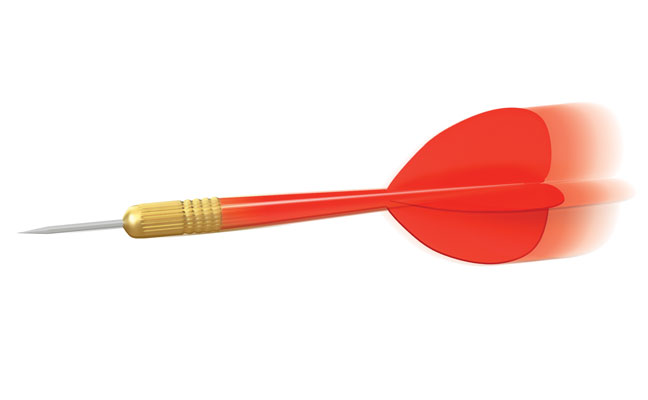 1. Raise prices. Using tools such as break-even analysis, determine what your acceptable dollar-per-hour rate will be to show a 50 percent-or-better gross margin. As the cost of other goods rise, your business’ prices must rise as well. Look at competitors; if their prices are well above yours, a price hike may not drive customers away — especially for an essential service such as pest control. A gradual price hike over a longer period instead of an abrupt one may be easier for your customers to adjust to, so plan ahead. But be aware of the competition, and don’t lag behind with price increases.

3. Use your accounts payable (A/P) to your advantage. A/P are the opposite of A/R in terms of the strategy you employ. Maintaining an A/P balance is like an interest-free loan that, if managed properly, will keep your financing costs down. Take great care in devising your strategy here, however. You don’t want to become known as the firm that doesn’t pay its bills. Rather, maintain balances with your vendors in the current column, but consider maximizing your credit limit with vendors instead of using expensive credit lines.

4. Restructure your workforce. Most businesses will reduce costs during an economic slowdown. The interesting thing about pest management is that no matter what the economy looks like, we never seem to get enough quality team members. So, while it may sound counter to the reduction-of-costs strategy, it may be a good time to add quality teammates. Keeping your workforce nimble and well-trained during trying times increases productivity while building loyalty that will make you stronger when the economy rebounds. Make sure you have an escape route, though, if the economy craters and adding staff will jeopardize your company’s ability to weather the storm.

5. Keep your fixed costs to a minimum. Fixed costs are those that don’t happen on the road. These include, but are not limited to, office rent, utilities, copiers, computer costs, office labor and management. These costs should be approximately 20 percent of revenue. 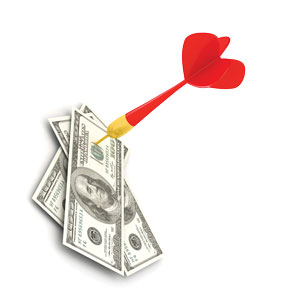 7. Be smart about your sales and advertising expenditures. During good times and bad, many companies that are operationally well run get into trouble by overspending on unsuccessful marketing efforts. Per the PCO Bookkeepers Pest Control Industry Cost Study, referenced in Table 1 on p. 24, sales and marketing expenditures should be around 10 percent of total revenue. For more detail on this, see “The true cost of customer acquisition,” at right.

8. Boost productivity. Every step you can take to increase route efficiency or sales/office efficiency has the same effect as raising prices: It falls right to the bottom line. Again, raising prices has an immediate positive effect on margins. But as this economic situation progresses from inflation to a potential recession, price increases might become less of an option as more consumers feel the squeeze of a shrinking economy. Instead of raising prices, one of the most powerful things you can do to increase margins is increase route efficiency. This move has the same effect as raising prices as return-per-hour increases. Optimize your routes by increasing the number of stops your technicians can complete in their normal workday.

9. Address unprofitable services. Do you deliver any non-core services that don’t recur, pull down profitability, and are offered as a loss leader? Reconsider them. The idea is to drive up profitability in times of inflation to offset costs you cannot control. Remember, if you are looking to build a valuable company over time, the primary services you offer should be recurring.

10. Run and rerun financial budgets to reflect “what-if” scenarios. Test the effect on profit of a 15 percent increase in wages, a doubling of material costs or a large rate increase on auto insurance. Determine how much you would need to increase prices to hold the line. In addition, conduct a sensitivity analysis to determine how many customers you can lose from a price increase without having a significant effect on profitability.

The good news is the average company in the William Blair/PCO M&A Specialists Pest Index — online at SellMyPCOBusiness.com/william-blair-pest-control-buzz — grew by 15 percent, taking the nine-month average for 2022 through September. On the other hand, the current economy remains highly volatile. The cost of money, goods and services is increasing at a much higher rate than we are accustomed to, so we’re forced into fighting to hold our bottom lines by taking measures to increase our revenue while decreasing costs where we can.

Now more than ever, we have economic and company-specific data we must use to fight inflation and mitigate its effects on our businesses. Consider implementing some or all of these 10 tactics to help your company “hold the line.”

The true cost of customer acquisition 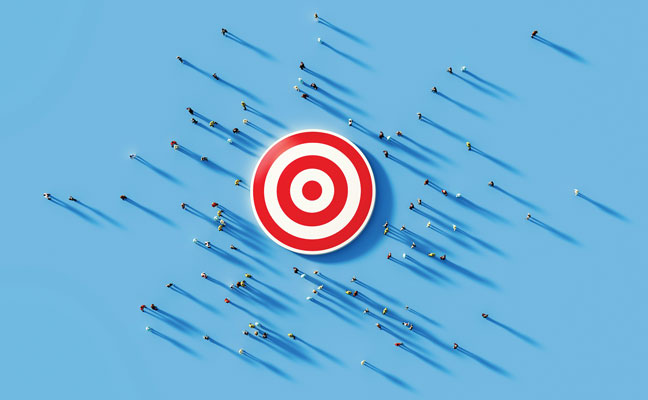 This is not to say that we shouldn’t pay more than 50 percent. After all, if you follow the mergers and acquisitions market, many companies are selling for significantly more than 50 cents on the dollar. But if you spend more than 50 percent, or you decide you are looking to garner more customers than the amount that represents 20 percent of your business, you will erode your overall profit margin.

If you plan to grow significantly or your cost-per-customer acquisition significantly exceeds the 50 percent rate mentioned above, you likely will burn up your profit and might cause a loss that will need to be funded.