⦁ Crows are intelligent and can learn to count, talk, solve puzzles, and create and use tools to solve problems. So far, they haven’t figured out the New York Times Crossword Puzzle, but some are clearly smarter than a fifth grader. 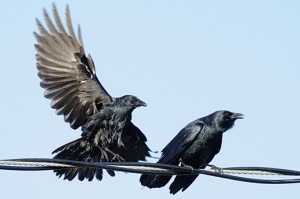 ⦁ They eat carrion (the decaying flesh of dead animals) because they have trouble piercing skin, feathers and fur with their beaks until the body softens and deteriorates. They prefer softer and more available fare such as earthworms, fruit, nestlings, eggs and stolen dog kibble from outdoor dishes.

⦁ Crows live together for breeding and nesting, and can maintain the same roosting area for more than
100 years. Roosting areas can contain 1 million or more individuals.

⦁ They’re susceptible to West Nile Virus, and are used as a sentinel species to safeguard human health.

⦁ They’re classified as passerine birds (part of the order Passeriformes); thus, the Migratory Bird Treaty Act of 1918 protects them.

⦁ The oldest living crow was a captive bird in New York City that lived to be 59. The oldest recorded wild crow was 16 years old.