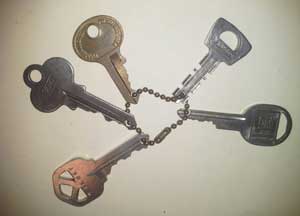 For example, the late Noad Corley, founder of Corley Pest Control in Dallas, was known throughout the industry as a gentleman and a prankster. Fellow Hall of Famer Norm Cooper (Class of 1999) sent us a photo of one of his favorite gag gifts made by and given to him by Corley — the “Aggie Keys.” Take a closer look at where the key ring goes through, and you’ll see it’s a sly dig at Texas A&M.

On a more serious note, each of these candidates was nominated by members of the industry and voted in by the Hall of Fame committee, whose membership rotates each year. If you’d like to be part of the nomination process for the Hall of Fame Class of 2016, click here.

PMP would like to acknowledge the generous support of its Hall of Fame sponsors.