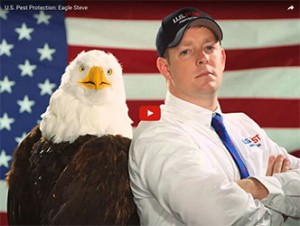 U.S. Pest Protection’s TV commercial, which involves an animatronic eagle, a puppeteer who has worked on “Sesame Street” and a songwriter who had a song on “The Voice,” won two Telly Awards in an international competition that drew more than 13,000 entries from all 50 states and countries on five continents.

“U.S. Pest Protection gave BOHAN the creative freedom to create a TV spot that was a huge departure from anything we’ve ever done, so this award recognizes success not only for our client but for us, too,” says Shari Day, president and CEO of BOHAN Advertising. “Eagle Steve and this TV spot were important elements in developing a new look and elevating the profile of a second-generation Nashville-based business with a 30-year history.”