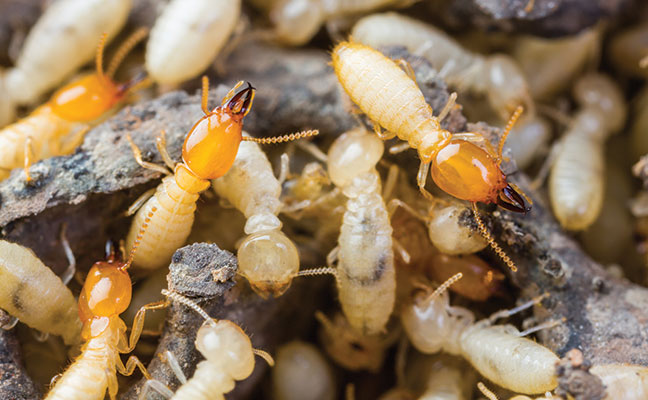 Ensuring that wood mulch is not added on top of treated soil or piled above the bottom edge of siding or brick veneer is one of the most common recommendations pest management professionals (PMPs) make to homeowners during a termite inspection.

Conventional wisdom is that untreated mulch added to flower beds and ornamental plantings around a foundation can act as a “bridge” for termites to bypass treated soil. This concern probably is more important for structures treated with repellent termiticides — but the recommendation is well intentioned, because wood mulch can hide evidence of termite mud shelter tubes on exterior foundation walls.

But should PMPs recommend mulch be eliminated from landscapes because it provides food, insulated soil and moisture for foraging termites? Nearly 20 years ago, a study* compared termite activity in bare soil to shredded hardwood and eucalyptus mulch, pine bark nuggets, and pea gravel. Surprisingly, the type of ground cover did not influence the likelihood that termites were present. However, monitors beneath pea gravel showed greater bait consumption, indicating sustained activity over time.

What should you recommend to homeowners worried about attracting termites by using mulch in their flower beds? According to this study, termites were just as likely to be found in covered soil as they were in bare ground, regardless of mulch type. Termites seemed to be active under pea gravel longer, which might be attributed to a slightly higher soil moisture level under this ground cover. So, counterintuitively, pea gravel should be the least-preferred ground cover adjacent to foundations.

Ultimately, though, the most important advice you can give customers is to have frequent, comprehensive termite inspections — performed by a trained professional who knows exactly where to look and how to find evidence of termite infestations.