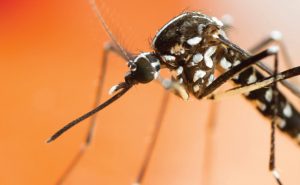 The Asian tiger mosquito is a known carrier of West Nile virus, yellow fever and other illnesses.(PHOTO: ISTOCK .COM/GORDZAM)

“The male mosquitoes infected with Wolbachia — which is harmless to humans — will mate with female mosquitoes, who then become infected and don’t survive adulthood,” we noted. In fact, the eggs never hatch. Introducing the infected population into the wild was a decidedly low-tech operation: “Staff members released the infected mosquitoes by blowing through the cardboard tubes the mosquitoes were transported in.” And at the time of our May 2017 article, MosquitoMate was awaiting permits from the U.S. Environmental Protection Agency (EPA) to sell Wolbachia-infested Asian tiger mosquitoes (A. albopictus) as a pest control service.

In November 2017, we reported that the EPA approved Wolbachia-infected mosquitoes for use in 20 states. The male Asian tiger mosquitoes are branded as ZAP Males, with a five-year registration: “MosquitoMate says it produces the ZAP mosquitoes in its facility and releases them at residential accounts once per week throughout the mosquito season.”

Fast-forward to May 2019, and the Entomological Society of America’s publication “Entomology Today” reports “encouraging results” from the program:

“Starting in February 2018, the City of South Miami, Miami Dade County, Clarke Mosquito Control Services, and MosquitoMate, began a project in which Wolbachia-infected A. aegypti males were released into an approximately 150-acre area in South Miami… The The WB1 males cause cytoplasmic incompatibility (CI) when they mate with wild type Ae. aegypti females, which leads to egg-hatch failure. Therefore, the repeated, inundative release of WB1 males can act as a species-specific, self-delivering pesticide.”

The results were reported in the April 22 issue of the Journal of Medical Entomology, which found a reduction of female Asian tiger mosquitoes by more than 75 percent.

The researchers in the study stress that this biological approach should be viewed as a tool in the integrated pest management toolbox, just one component of a more holistic strategy for control. They are now looking to fine-tune the approach, timing the release of the infected males with larvicide application to optimize control and keep down costs and larvicide use.

We applaud the researchers for thinking way outside the box in combatting these carriers of West Nile virus and other diseases. It will be interesting to watch as this goes from carefully-controlled studies to perhaps one day, the next generation of everyday mosquito control.