How to address poor reviews 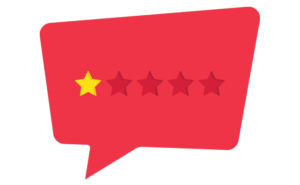 With poor reviews, it’s not a matter of if it will happen, but when will it happen. A one-star review doesn’t need to define our company, but not responding to it in a professional manner speaks volumes on how we run our business.

If Schopen Pest Solutions receives a review that is three stars or fewer, we go into action with these four steps:

A longtime client of mine went onto Facebook and blasted us (no review, just harsh words) for a single wasp being in her home. I called her as soon as I saw the review, and apologized for the one wasp being inside. I also explained to her the myriad ways a wasp could wander into her home. I sent a tech out the same day to check for any other wasp issues at her home. She not only deleted her Facebook post, she turned in a five-star review after my tech took care of her problem.

2. Sometimes, it is just easier to eat crow.

We had a new client for stink bugs. We performed the initial service for her in April, and explained she would still be seeing them because they were “waking up” from their diapause. Two weeks later she called us, complaining about the “hundreds of dead stink bugs” inside her home. After talking, coaching, teaching and finally arguing with this client for nearly an hour, I finally told her we would refund her money so she could hire another company. Two weeks later, we received a five-star review from the same client, saying how “honorable” we were and how happy she was now that her stink bugs were disappearing. (Funny, she didn’t offer to return the money.)

By using service agreements, clients have a better understanding of the how, when and why. By keeping customers in the loop, we give the client a more realistic measure of the services we are providing. This helps us avoid any misunderstandings.

Maybe the customer really does have a legitimate beef with our company. Not only can I earn their trust — and hopefully, a five-star review — by amending or fixing the problem, we can coach our techs on how to do a better job.