The setting definitely is different. Last year, pest management professionals were among the last of the groups allowed on Capitol Hill to advocate for their industry, because the coronavirus had not yet been declared a pandemic. Two days after the March 8-10 event took place in Washington, D.C., Congress closed the U.S. Capitol and House and Senate offices to the public.

Because the closures still stand, NPMA members discussed the issues via virtual meetings with their state representatives. The NPMA partnered with Soapbox to create meeting schedules and provide an easy-to-use platform to coordinate talking points and contact information. 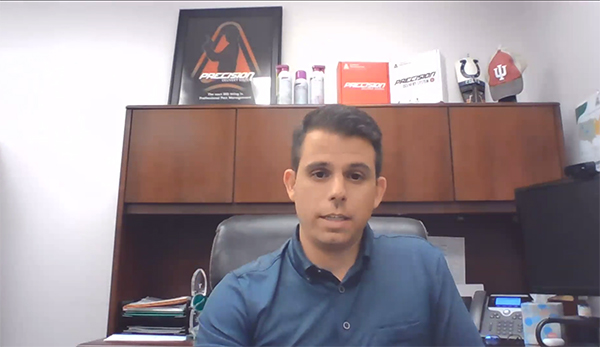 Legislative Day featured several sessions that allowed attendees to learn about the three issues that are the focus of this year’s event. Led by the NPMA’s Public Policy team, attendees learned how best to highlight these issues when they speak with their representatives at the end of Day 2.

Specifically, the NPMA advocates for the inclusion of the following issues in future bills Congress proposes to help support the economy:
Disinfection tax credit: The NPMA said it supports a refundable tax credit for 50 percent of the costs incurred by a business for disinfecting, extra cleaning, and other measures to keep Americans safe and healthy. A tax credit for disinfection services would assist businesses across the country in maintaining a safe experience for customers and employees while not creating an unmanageable expense, the NPMA added.

Food supply essential workers tax credit: Because PMPs help keep the food supply chain safe — from the factories where food is processed, to grocery stores where it is sold, to the restaurants and homes where it is cooked and served — the NPMA said it would support a federal tax holiday and a payroll tax exemption for all essential employees, PMPs included, in the food and agriculture industries.

In addition, the NPMA made clear it opposes political or arbitrary product bans:
Protect America’s Children from Toxic Pesticides Act (PACTPA): The NPMA said it does not support this bill, which was proposed last year and was not passed, but may come up again. The PACTPA would repeal pesticide preemption from the 45 states where it currently exists, and allow local governments to regulate pesticides instead. Pest management companies are committed to following all conditions of use specified by the U.S. Environmental Protection Agency and state lead agencies, and want to ensure pesticide regulation is based on sound science and is consistent across the jurisdictions in which they work, the NPMA said.

Attendees also learned virtual meeting tips, including what to wear, what to say and why it’s important to follow up.

This year, attendees logged in to Zoom from the comfort of their homes or offices (or home offices) instead of gathering at the Washington, D.C.’s Capital Hilton hotel for committee meetings, educational sessions and networking receptions.

NPMA members started Day 1 started with an Association Leadership Forum meeting that focused on “How to Lobby in a Virtual Forum.” 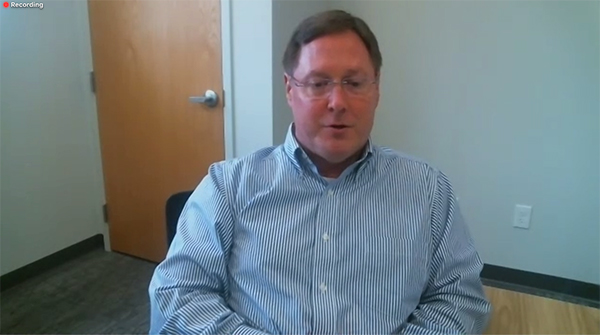 The heads of state pest control associations were invited to discuss the impact the COVID-19 pandemic has had on the industry, the members of their associations, and their ability to protect pest management professionals’ livelihoods.

Bonnie Rabe, Rollins Inc. and chair of the NPMA’s Public Policy Committee, moderated this session, asking the three panelists to share their experiences from the past year, so that other association heads could follow their lead.

Bill Welsh, Rose Pest Solutions, discussed the progress he made with the Michigan Pest Management Association and the Indiana Pest Management Association. He said communicating with lobbyists and legislators was easier during the pandemic, and proved beneficial. “As long as you keep the lines of communication open, they will be there when you need it.”

Ted Brayton, Griggs & Browne Co., serves as head of the New England Pest Management Association, which represents five states: Massachusetts, Maine, New Hampshire, Rhode Island and Vermont. “Online exams and licensing renewals are what came out of 2020,” he said. Members relied on the association, he added, to learn about continuing education units (CEUs), training, and laws that were changing in the state. 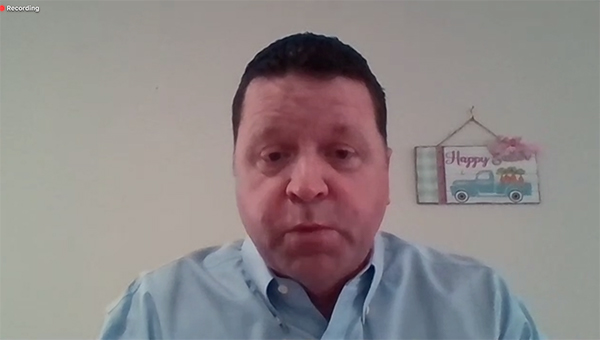 Ted Brayton, head of the New England Pest Management Association, encouraged other pest control associations to budget for hiring a lobbyist who can regularly get you in front of the key decision makers. SCREENSHOT: PMP STAFF

Andrea Coron, Cooper Coron & Associates, manages the Virginia Pest Management Association. She said the association was instrumental in helping members get and stay certified after the pandemic caused shutdowns, developing a test for certified applicators and webinars on recertification.

In the past year, we’ve had more new members than we have in years past,” she said. “We are communicating the knowledge that PMPs need to do business right now. The work we are doing is exactly what our members need.”

The first General Session on Day 1 was the official kickoff to Legislative Day. Nathan Gonzales, editor and publisher of Inside Elections with Nathan L. Gonzales, delivered the keynote address. 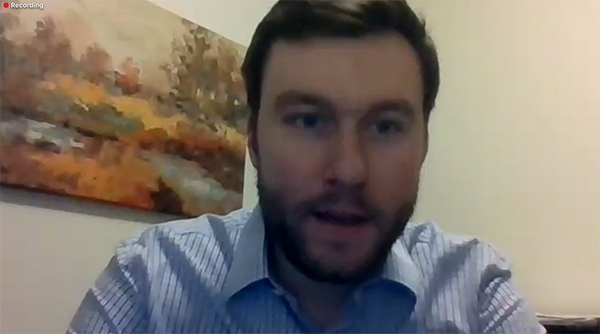 He started off by saying bed bugs are the worst pest of all, adding, “What a disaster. Thank you for what you all do.”

Gonzales then shared his thoughts on redistricting, the upcoming midterm elections, and the 2024 presidential election.

The second General Session on Day 1, titled “Welcome & Legislative Briefing Update,” featured the NPMA’s Public Policy team to break down the issues for members who scheduled virtual visits with their state representatives. 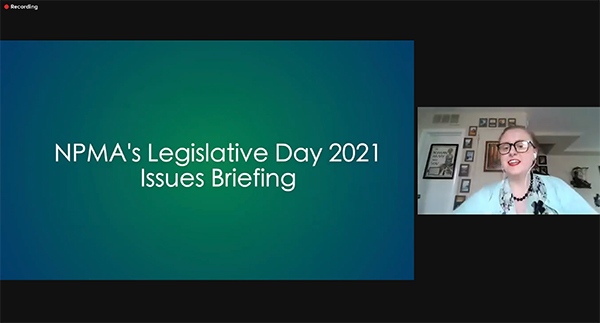 The NPMA’s VP of public policy, Ashley Amidon, CAE, offered talking points regarding PACTPA and why this proposed legislation, which would repeal pesticide preemption on a national level, would make PMPs’ jobs nearly impossible.

Amidon explained meeting protocol. She stressed the importance of following up after each meeting, whether it was with a representative or a member of his or her staff.

Kevin Schultze explained how to use Soapbox, the platform that allows attendees to manage their Capitol Hill meeting schedules. SCREENSHOT: PMP STAFF

The last presentation of Day 1 served as an introduction to the virtual platform members will be using for their virtual Capitol Hill visits. Kevin Schultze of Soapbox, the platform that members will use to conduct schedule and organize their meetings, explained how to get the most out of the technology. To prepare for the Day 2 meetings with state representatives, attendees met up virtually. Perhaps next year, attendees will be able to once again gather in groups by state, as is custom during Legislative Day.

On Day 2 of Legislative Day, the event kicked off with the NPMA honoring several of its members. Up first, it announced the PestVets Veteran of the Year, an annual honor sponsored by FMC. Dr. Stan Cope, VP of Technical Services, Catchmaster, was taken by surprise the moment he learned he received the honor, and the NPMA plans to recognize him in person later this year, at PestWorld 2021. “I’ve had a lot of nice things in my career, but this is the top thing professionally,” he said.

Bonnie Rabe, managing director of government relations for Rollins Inc. and chairperson of the NPMA’s Public Policy Committee, was named recipient of the FMC Award. “I am totally and absolutely shocked, and I can’t tell you how honored I am,” she said as her name was announced.

As part of the kickoff to the virtual Capitol Hill appointments, sponsored by MGK, Iowa Senator Joni Ernst (R-IA), and former Senator Bob Dold Jr. (R-IL), thanked the pest management professionals in attendance for providing an essential service during the coronavirus pandemic. 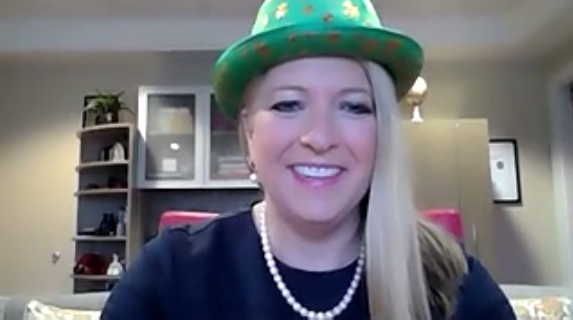 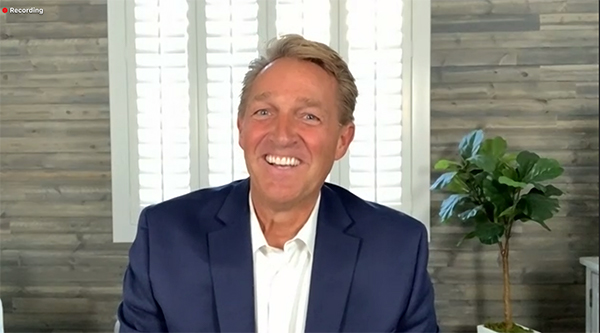 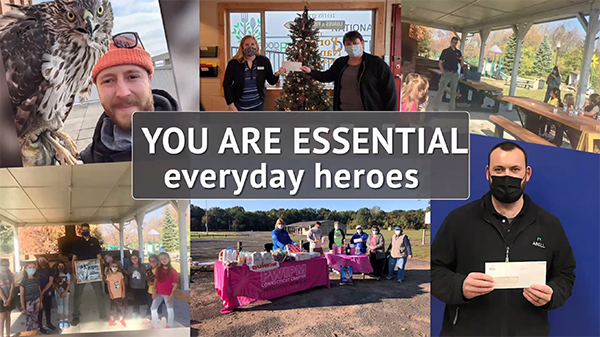 The NPMA created and showed at Legislative Day a video that reflected PMPs’ hard work during the COVID-19 pandemic. SCREENSHOT: PMP STAFF 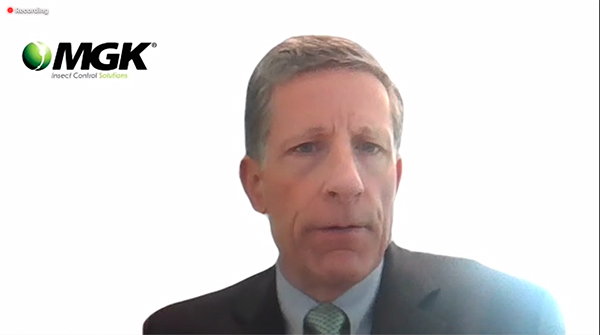 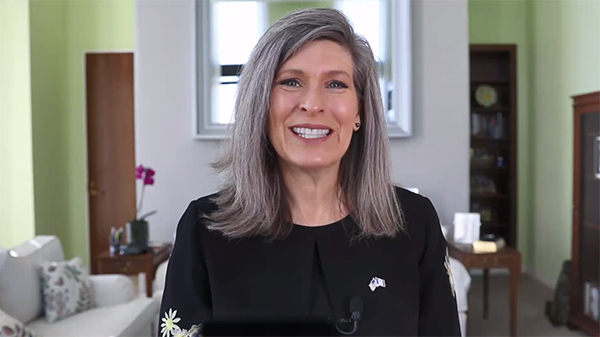 Iowa Senator Joni Ernst (R-IA), the first female combat veteran to serve in the Senate, said in a recorded message that she was grateful to “the hardworking pest management professionals who have answered the call and have worked tirelessly to help ensure public health and food safety.” SCREENSHOT: PMP STAFF 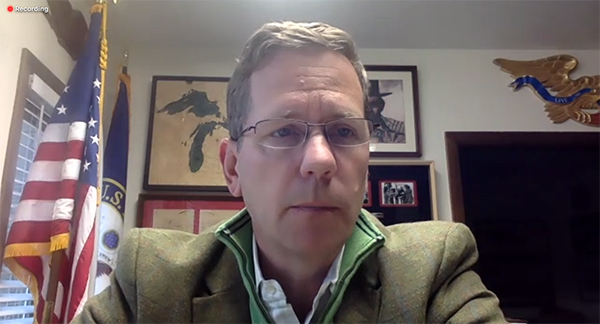