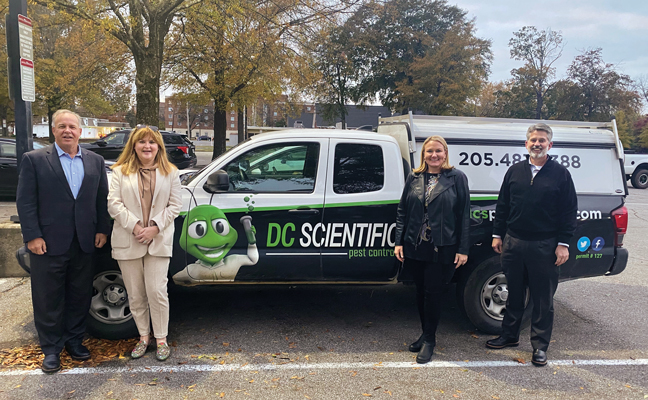 Finding a suitable workplace for her employees was one of several reasons Ann Majcher sold her company to Arrow Exterminators.

The owner of DC Scientific Pest Control, which is located in Tuscaloosa, Ala., with branches in Birmingham and Winfield, said she “looked for a company that would provide employees with many growth opportunities.”

Majcher’s parents, Bill and Barbara Moore, founded DC Scientific Pest Control in 1964. She got involved in 2012 when her father fell ill. By 2013, she was fully immersed in the business.

“I sat at his desk every day, which was kind of hard to do [after he passed away],” she says. “But at the same time, I would think, ‘Well, here I am at Dad’s desk again today. What would Dad do?’ I just tried to keep his spirit with me.”

Majcher was developing plans for the company when she was offered an opportunity to sell instead. She had hired a consultant for expert advice on how to grow her business, and was not in an “I need to sell my company” mindset.

But she got on board when she realized a sale would benefit her employees. She believed new owners would give them an opportunity to advance in the pest control industry. “For some of my employees, I could not have helped them move forward in their careers,” Majcher says. “They had done all they could do with me.”

When she gathered her employees for a meeting to inform them of the sale to Arrow Exterminators, she reminded them of her open-door policy if they wanted to talk.

“I talked to a lot of the employees one-on-one since the sale, and I feel blessed I was able to work with them,” she says. “They realized it needed to happen — really more for them than for me. After talking with them and explaining they may make more money and grow their careers, they were OK with the sale.”

COVID-19 also was a factor in Majcher’s decision to sell the company. Like companies in many industries, not just pest control, trying to hire employees in the midst of a pandemic has been a challenge. In addition, four technicians were out for 14 days, and for a company with just 34 employees, their absence was felt. “That’s hard on a company of this size,” she says.

Majcher says she thought the transition would be more difficult for a 57-year-old company to undertake, but it has been “shockingly” smooth. She says she has her outstanding operations manager, Randy Dawson, as well as her exemplary support team, technicians, bookkeeper and branch office staff to thank.

“I got very lucky with the people I had working with me,” she adds. “We hired people who were very organized, and that helped a lot during the sales process.”

The company’s stellar reputation helped, too. For nearly six decades, DC Scientific has been known for its outstanding customer service. She adds that she knows she could have emphasized the fact that DC Scientific Pest Control was female-owned, but that wasn’t important to her. What was important was the customer service her team provided customers.

Majcher’s experience as an owner swayed her decision when she sold her company. Working with a female-run company (Arrow Exterminators’ CEO is Emily Thomas Kendrick) seemed right.

“We are proud to join the Arrow family, and continue the legacy my dad started over 55 years ago,” she says.