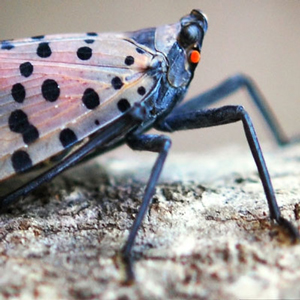 What do telephone poles and random vibrations have to do with spotted lanternflies (Lycorma delicatula, also known as SLF)? Both topics played a big role in recent studies published about the invasive pest, which was first recorded in the U.S. in 2014 and has since spread to several states.

While SLF is especially detrimental to agricultural and turf concerns, pest management professionals (PMPs) may encounter customer complaints — particularly if they are in the Northeastern U.S. Several states have public messaging campaigns that basically direct consumers to kill on sight, or to at least alert authorities if they encounter the pest. Last year, Viking Pest Control got in on the public education front by distributing “SLF egg removal scrapers” to customers, featuring a special URL for more information.

Researchers admit there is still a lot to learn about SLF. What follow are summaries of two recent studies published about the pest:

In the Oct. 28, 2022, edition of the Journal of Economic Entomology (JEE), a study was published by a team led by Dr. Barukh Rohde as part of the U.S. Department of Agriculture’s Agricultural Research Service (USDA-ARS) Subtropical Horticulture Research Station in Miami, Fla. Titled “Evidence of Receptivity to Vibroacoustic Stimuli in the Spotted Lanternfly Lycorma delicatula (Hemiptera: Fulgoridae),” the study in laymen’s terms found that SLF respond to vibrations during laboratory experiments. As Ed Ricciuti notes in an article about it for Entomology Today, the online publication of the Entomological Society of America (which also produces the JEE):

Some insects deliberately produce vibrations, like the cricket’s chirp. Others, like those from a trapped ant, are incidental. Either way, substrate-borne messages can trigger aspects of insect behavior such as mating, predation, avoiding predators, or foraging. Understudied, the role of vibrations that use substrates as a channel for insect communication is receiving increasing interest from researchers, including its potential to modify insect behavior for integrated pest management (IPM).

Spotted lanternflies are becoming famous — or, rather, infamous — for gathering like flash mobs, massing on tree trunks and backyard furniture, even ending up in people’s clothing and entering buildings. Chemicals released by honeydew may help trigger these lanternfly conventions. The new research suggests that vibrations may also play a role in these get-togethers, which occur prior to mating. Their egg masses, which adhere even to the tires of vehicles, enable the spotted lanternfly to travel well.

Lanternflies were placed in an arena floored by white paper atop a plywood platform covered by tulle fabric. The observer was hidden. When the vibrations were broadcast, the insects clustered toward the signal, dispersing when it stopped.

Based on their findings, the USDA team suggests next conducting field studies to monitor vibrations in trees where lanternflies are congregating and mating. Eventually, such studies could perhaps lead to development of what pest control managers call “vibrational trapping.”

Meanwhile, at the Penn State Berks Center for the Agricultural Sciences and a Sustainable Environment (CASSE), a research team wanted to exploit the SLF’s attraction to tall objects “like skyscrapers, gas pumps, pillars and trees,” per a Penn State article on the topic. It also notes that SLF “use these perches to gain their bearings before searching for a place to feed.” Also per the article:

At the CASSE, telephone poles were used as monitoring devices to test methods of eradication. In the study, eight poles were set up in a straight line to keep a replication. Two types of traps were installed on each pole: a top trap with a sealed barrier except for an opening at the bottom and a section of pole wrapped with pesticide-impregnated netting, which the insects encountered on their journey to the top. At the bottom of the pole there is a catch trap to collect any dead, falling lanternflies.

Four of the poles were outfitted with white netting, like the type that is used in tobacco houses, while the other four had black netting, which is typically used for mosquitoes, explained the researchers… The mosquito netting was more effective in eradicating the lanternflies, causing them to die and fall within a couple of minutes. The tobacco netting required a longer contact time before the lanternflies succumbed and fell into the trap.

Still, researchers caution that SLF can adapt quickly: “Every time we think we see a pattern coming up, and we have collected two years of consistent data, it’s completely thrown off track by the third year. So we’re trying to find out if it reverts to the old cycle,” John Rost, a research technologist in the horticulture department at Penn State Berks, said in the article.

An upside to SLF?

Ricciuti explains in the Entomology Today article that “As the lanternfly feeds, it excretes sugary glop called honeydew, which makes a gooey mess, attracts bees and wasps, and promotes the growth of sooty mold, a gross blanket over ornamental plants, patio furniture, cars, and anything else on which it grows. The honeydew problem is aggravated when lanternflies congregate, as they commonly do.”

But as with anything else, there could be a silver lining to this “problem”: Atlas Obscura reported last year that the flavor of honey produced by bees consuming SLF honeydew has a delicious  “maple bacon” flavor that is unlike any other.