The 2016 class of  Pest Management Professional’s (PMP’s) Hall of Fame was honored at a black-tie ceremony Oct. 17 at the Sheraton Seattle Hotel in Seattle on the eve of the National Pest Management Association‘s 2016 PestWorld. 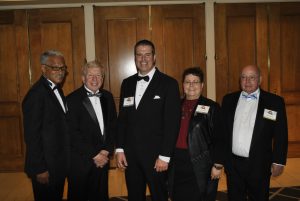 The PMP Hall of Fame induction ceremony for the Class of 2016 included, from left to right, Dr. Vernard Lewis; Larry Treleven; Blair and Brenna Toblan, who accepted the honor on behalf of their father, the late Vern Toblan; and Dick Sameth. Photo: PMP Staff

This year, four industry icons joined the ranks of 83 other members of the PMP Hall of Fame, which was established in 1997 to recognize the many leaders and pioneers — both contemporary and from generations past — in the pest management industry.

The evening’s first honoree was Dr. Vernard Lewis, who currently serves as Cooperative Extension Entomologist at the University of California, Berkeley. He’s been involved in the pest management industry for 35 years. Before his post as an entomology professor, Dr. Lewis was pest management department head at San Quentin Prison and owner of IPM Systems.

During his acceptance speech, Dr. Lewis thanked his Nana and Pop in Fresno; his parents for teaching him responsibility; his 9 brothers and sisters, who taught him how to cooperate and negotiate; his Aunt Ethel, who let him sleep on her couch for two years while he attended college; and Berkley, for “three degrees and a job.”

He said, “I had this tremendous network of industry and academics…thank you for supporting my career.” He then thanked his wife, Dr. Lisa Kala, saying, “She’s here today, she’s always been there with me.” He also thanked his daughter, grandson and the relatives who remind him “there’s more to life than just work.”

“When [PMP Editor] Heather Gooch called me to tell me I’d been selected to be inducted in the Hall of Fame, I was overwhelmed,” he said. “Hard for me to believe that, 18 years ago, I received this award for my father, J.E. Sameth.” Sameth acknowledged his wife, Polly, who could not attend, as well as valued colleagues in the pest management industry.

He continued, “Due to my dad’s involvement and my age, I find myself to be a link between the founding fathers of our industry and today’s leaders who have very abley continued the willingness to share their philosophy.”

Larry Treleven, co-owner and co-president of Sprague Pest Solutions, has been in the pest management field for 45 years. At Sprague, he’s been a technician, sales associate and branch manager and now splits management duties with brother, Alfie Treleven.

Looking on as Treleven was inducted into the Hall of Fame were 13 members of his family, including his wife, Jane, his children and his infant grandson and granddaughter.

He thanked the family and the company for making it possible to serve the industry, which took time away from the company. He also thanked his fellow Class of 2016 inductees, with whom he worked over the years.

Posthumous inductee Vern Toblan was instrumental in guiding industry fraternity Pi Chi Omega into the 21st century. He took immense pride in his work for the fraternity, and his enthusiasm was contagious. His daughter Brenna and son Blair were on hand on their father’s behalf.

In a moving speech, Brenna told the crowd, which included many Pi Chi Omega members, “It’s been very moving to hear all the kind words everyone has had to say about our dad. We really didn’t know, from our perspective, just how involved he was in the industry.”

Son Blair concurred, saying, “My father didn’t just have a passion for the pest control industry, he had a passion for life. He was tremendously honored to be a part of the industry.” He thanked Heidi Ross, Toblan’s longtime partner who was unable to attend the ceremony, as well as those in the industry who knew him.

“Nothing would make him happier than this group gathered together, thinking of the good times that you all experienced with him,” he said.

The PMP Hall of Fame induction ceremony is an annual event. To nominate a someone in the pest management industry, submit a nomination form.

Larry Treleven is pictured with his family that attended the PMP Hall of Fame. Photo: PMP Staff