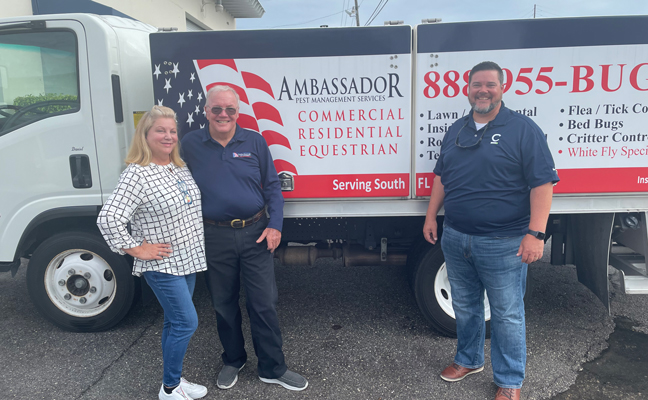 From left are Sherry and Scott Lewis, owners of Ambassador, and Ron Shakespeare, SE Market President for Certus. PHOTO: CERTUS

Founded in 1989, Ambassador is one of the oldest family-owned pest control companies operating in the West Palm Beach, Fla., area. Owner and founder Scott Lewis grew the business over the past 32 years through a commitment to providing exceptional service and customer care.

“Selling the business I built from the ground up was a difficult decision,” Lewis said. “By choosing Certus, a company that truly puts people first and is committed to excellent service, I’m confident that I’m leaving both my customers and employees in great hands.”

Mike Givlin, CEO and co-founder of Certus, said, “We’re excited to continue to develop our Florida business with the addition of Ambassador Pest Management. Scott has built a strong business with a long history of commitment to his customers; we’re proud to have been chosen to take up that mantle.”