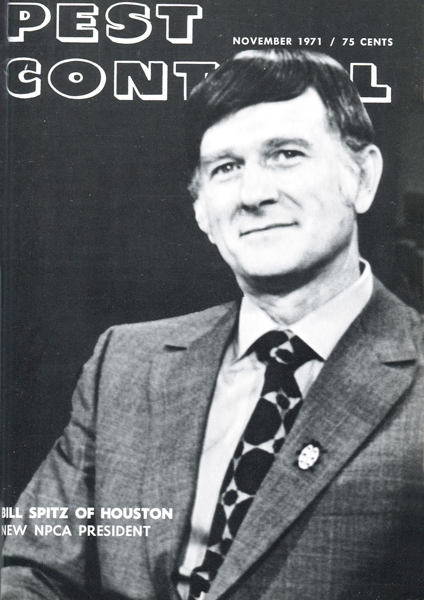 Sometimes, milestone years come when we least expect it. For the first time in the event’s history, the National Pest Management Association’s (NPMA’s) PestWorld 2020 will be a virtual conference this month, thanks to the COVID-19 pandemic.

But almost 40 years ago, the October 1971 conference of what was then known as the National Pest Control Association (NPCA) tackled another milestone: The creation of the U.S. Environmental Protection Agency (EPA) under then-President Richard Nixon, which had just launched on Dec. 2, 1970.

The November 1971 article in Pest Control (as PMP magazine was known at the time) covered the NPCA annual conference, held in Boston, Mass.

Dr. Heal spent 23 years with the NPCA, first as technical director, then as executive director. According to our November 1971 cover story, Dr. Heal was serving as the association’s executive secretary.

Dr. Heal’s strong support of the association members gave them the credibility and confidence to assert a proactive relationship with the government, when the move toward more regulation was underway.

While greater restrictions are expected on pesticides, many problems will remain, which can only be solved through the use of restricted pesticides. This will mean increased business for our industry.

The Pesticide Control Act was pending, and the bill was expected to require pest management professionals (PMPs) in all 50 states to have a certification or licensing plan for pesticide use.

In the article, Dr. John Osmun — another PMP Hall of Famer (Class of 1997) — shared why training would be so important for PMPs’ certification:

Proper use of pesticides is tied closely to user competence. And certification carries with it the concept of increased training. Training is an investment… and insurance that you continue in business.

William Spitz, yet another PMP Hall of Famer (Class of 2006), was pictured on the cover of our November 1971 issue. As with Dr. Heal, the 1971-72 NPCA president also pushed for industry professionalism and involvement as the government considered regulations:

Newly elected NPCA president William Spitz, Big State Exterminators, Houston, seemed to further discussions of the future with a stern warning: Good intentions and a recognition of sound ideas is not enough. The house we live in is under attack, but we have the tools to build a new structure. It is up to each of us to carry out these ideas in our own businesses … build with ideas we know are sound — a new edifice, a new image if you will. The end is near, the end of an era — the beginning of a new age, the age of professionalism.

With the COVID-19 pandemic changing the way PMPs serve customers to rodenticide regulations in California, 2020 will be another time period that the industry marks for years to come.